Kandinsky painting could fetch up to €28m 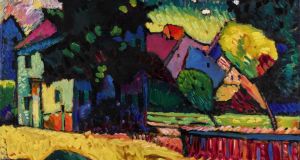 Summer holidays in spectacular places inspire many of us to wish we could pick up a brush and recreate their beauty in paint. Most of us forget the impulse as soon as we get back to work, if not sooner – but for the Russian painter Wassily Kandinsky, a summer in an alpine village near Munich proved positively life-changing. It helped mark his transition from figurative to abstract painting, transforming the course of European art history in the process.

One of the works Kandinsky produced as a result of his stay in the Bavarian Alps in the summer of 1908, Murnau: Landschaft mit grünem Haus, is expected to make up to £25 million (€28.4m) when it goes on sale at Sotheby’s in London next week.

The village’s picturesque location – on a hill above a moor with Alpine peaks on the horizon – the intense light and the colourful local houses enthralled Kandinsky and his group of artist friends, moving them to pioneer an expressive new style of painting fuelled by an explosion of pure colour, applied in brushstrokes of thick paint.

Though it is recognisably a village scene, the forms of Murnau: Landschaft mit grünem Haus are flattened and simplified, showing the painter well on his way to the later work which would earn him the title “the father of abstraction”.

An art theorist who saw many parallels between visual art and music, Kandinsky’s use of colour always had a spiritual aspect. He often used musical metaphors for his work – compositions, improvisations, fugue – and wanted art to be able to touch the heart with a power and immediacy similar to that of music.

Colours, he believed, produce a corresponding spiritual harmony, and the way in which they placed next to one another creates the “music” of the painting.

In 1937 Kandinsky wrote with pride about the impact of the Murnau landscapes that were still in his collection: “the colours have to this day remained completely fresh,” he said, “as though they are still wet. It was not without good reason that I concerned myself so very much with technical matters.”

First shown at the Royal Albert Hall in 1910, Murnau: Landschaft mit grünem Haus has been in the private collection of the same family since the 1920s, though it was on loan to the Tel Aviv Museum of Art for many years. This is the first time it will be auctioned and it carries an estimate of £15-£25 million.