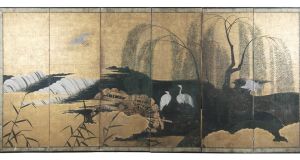 Wealth, glamour, sexual scandal, political shenanigans: the life of Anne Bullitt pretty much had it all. It even had an ending straight from a Hollywood “weepie”; she died in a nursing home in Ballybrack in 2007, almost blind, a ward of the Irish court, with her finances tangled up in a court case that dragged on for almost a decade.

But the items from Bullitt’s estate that will be auctioned at Adam’s At Home sale tomorrow hark back to happier times in her life.

She was born in Paris in 1924. Her father, the American diplomat William Christian Bullitt, had brokered a deal with Russian revolutionaries under Lenin. Her mother, Louise Bryant, was the subject of Warren Beatty’s film Reds; she was a journalist whose first husband was John Reed, author of the eye-witness account of the revolutionary events of October 1917 Ten Days that Shook the World.

Thanks to Bryant’s heavy drinking – plus a well-publicised lesbian affair with an English sculptor – when she and Bullitt divorced in 1930, he was granted sole custody of Anne. He was appointed as the first American ambassador to the USSR by Franklin D Roosevelt three years later and set off to Moscow with his daughter and her West Highland terrier.

It was an odd life for a nine-year-old girl, living in a suite in the National Hotel in Moscow while the American Embassy was still being built, attending endless parties where diplomats consumed vast quantities of wine, vodka and caviar while in the countryside peasants were dying of starvation by the million.

Anne grew into a headstrong, tempestuous young woman. She was famous for her elegance and style, and she married four times, but all four marriages failed. In the 1950s she moved to Ireland and when her third marriage to Roderic More O’Ferrall, owner of Kildangan Stud, broke up she bought Palmerstown House in Kildare.

In the decade since her death most of Anne Bullitt’s possessions have been sold at auction, including her exquisite collection of designer clothes and the 100-carat diamond necklace she commissioned from Cartier for her marriage to More O’Ferrall, which, when it came under the hammer at Christie’s of London in 2006, sold for just over £600,000.

The sale is not all about Chinese art: much of the material on offer is of the more traditional western kind, whether it be silver, jewellery, paintings or furniture from a stud farm outside Maynooth that changed hands recently, including a George III pollard oak breakfront bookcase (lot 247, €3,000-€5,000).