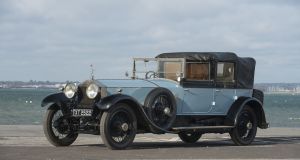 A 1924 Rolls-Royce Silver Ghost Cabriolet, once owned by Lord Louis Mountbatten, Britain’s last viceroy of India who was murdered by the IRA in 1979 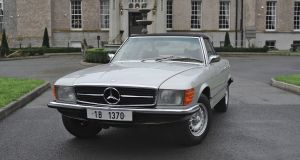 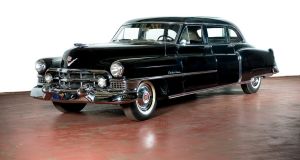 Vintage and classic cars are popular with wealthy collectors and the prices achieved can be extraordinary. The top end of the market is dominated by international auctioneers Bonhams which holds regular auctions in Britain, the United States and various locations in Europe of “classic motor cars, motorcycles and related memorabilia”.

This is a world of top drawer rather than Top Gear.

Last year at an auction in Beaulieu in Hampshire – home to Britain’s National Motor Museum – Bonhams sold a 1929 Bentley that had been “unearthed from a family barn after 30 years” for £695,900. The auction house said the vendor had “found the car gathering dust in his grandfather’s garage, and expected it to be valued at a fraction of the amount” ultimately achieved at the auction.

The vendor’s grandfather had bought the Bentley in 1935 and is known to have used it for family holidays throughout the 1930s and 1940s. The luxury car had even towed a caravan and is still fitted with the original tow ball.

“It was an incredible discovery – the chassis, engine, axle, gearbox, steering box numbers are all present and correct, the interior is completely original in wonderful green leather,” Bonhams said. “For a car that’s over 80 years old, it’s truly astounding.”

At the most recent auctions – in England and Germany – last month, “excellent prices were achieved”, according to James Knight, Bonhams International Group motoring director. He said “popularity continues for rare and desirable collectors’ motor cars”.

In the classic cars market, condition is not necessarily always important. Many collectors are happy to restore cars but, as in other areas of collecting, rarity and provenance (the history of previous ownership) can greatly affect the price.

In England last month, Bonhams sold two cars that had interesting previous owners. A 1924 Rolls-Royce Silver Ghost Cabriolet, once owned by Lord Louis Mountbatten – Britain’s last viceroy of India who was murdered by the IRA in Co Sligo in 1979 – sold for £264,700. A limousine, a 1951 Cadillac 75, once owned by Argentina’s first lady Eva “Evita” Duarte de Perón, “sold for £85,500.

In a separate auction devoted exclusively to Mercedes-Benz cars in Stuttgart on March 19th, Bonhams sold a 1973 Mercedes-Benz 350 SL Roadster – auctioned for the benefit of an Irish charity and originally owned by Romania’s late communist dictator, Nicolae Ceaucescu – for €49,450.

The car which, according to Bonhams, still contains “remnants of the security system installed by the Romanian secret police (known as the Securitate), including a Becker Mexico radio and a Becker short-wave radio system hidden in the glove compartment”. The car is a hard-top convertible. It has 17,439 kilometres on the clock and “the tyres are the originals from 1973”.

Conor Hughes, the head of CrossCause, a Dundalk, Co Louth-based charity, has confirmed to The Irish Times that the car had been donated by a supporter and the proceeds from its sale would be used to help fund Casa Bridget. It is an Irish-run residential care home for special-needs orphans in the eastern Romanian village of Nicoresti.

Mr Hughes said the car had been donated by a man from Northern Ireland who worked as a volunteer with the charity. The man, who wishes to remain anonymous, had gone to Romania in 2007 “to do some building work” for the charity and while there, had acquired the car. He shipped it back to Ireland, where it was kept in storage but not driven. He had told CrossCause that “if you’re low on funds, sell the [Ceaucescu] car”.

Bonhams holds the world record for the most valuable car sold at auction, a 1962 Ferrari 250 GTO Berlinetta which made $38.1 million (€28.5 million) at auction in Quail Lodge, California, in August 2014.

Bonhams also holds the world record for the most valuable pre-war Aston Martin sold at auction, with the 1935 Aston Martin Works Ulster LM19 Sports two-seater that sold for £2.9 million at the Goodwood Festival of Speed last year. The car had been modified to compete in the Ards TT race, an event that brought the world’s leading drivers to Co Down every year between 1928 and 1936. These cars were named Ulster following a particularly successful race at Ards in 1934.

Bonhams motoring department will host about 21 auctions worldwide this year. For further information, or to inquire about bidding, valuations or consigning an exceptional classic car, contact the Bonhams Ireland office at 31 Molesworth Street, Dublin 2.

Paul Flynn: I’d crawl over a mountain of nouveau-riche club sandwiches for a nice toastie
5