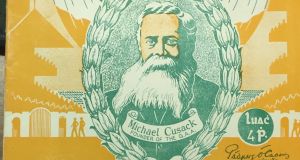 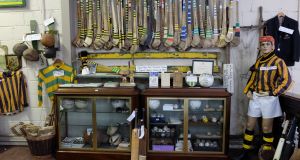 Some of the hurling memorabilia up for auction

Two September auctions timed to coincide with this month’s All-Ireland hurling and football finals are filled with items of interest to collectors of GAA memorabilia.

First up, on Wednesday next, at Mitchell’s Auction Rooms, Mount Butler, Roscrea, Co Tipperary, is the clearance auction of the contents of the former Nore View Folk and Heritage Museum of Bennettsbridge, Co Kilkenny.

The museum, essentially a huge private collection which the late owner Séamus Lawlor opened to the public, includes “multiple examples of both everyday and bespoke items used in daily life by Irish people in rural and urban areas, from Famine times through to the mid-20th century”.

Auctioneer Anne-Louise Mitchell said the lots would be “ideal for museums, vintage collectors, outfitters of bars and restaurants and for those people who are seeking quirky furnishings”.

Among the lots is a programme for the 1950 All-Ireland hurling final – in which Tipperary beat Kilkenny – estimated at €200-€300. Sixty-six years later, both counties are, of course, meeting again in Croke Park tomorrow for the 2016 final.

Fonsie Mealy Auctioneers said: “Joe Barrett played both codes for his club and captained the historic teams of 1931 which triumphed in both football and hurling, the only club in Kerry to have been successful in both sports.”

The lot also includes Barrett’s War of Independence medal. According to catalogue notes, “at the age of 15 Barrett became a member of the Irish Volunteers, with a hope to be instrumental in the establishment of independence for Ireland.

“Following the signing of the Anglo-Irish Treaty he took to the republican side in the subsequent Civil War. He was arrested and interned in September 1922 where he suffered severe hardship.

“He embarked on a 22-day hunger strike whilst imprisoned. He did however upon release go on to become a Kerry and Gaelic football legend. He died at the young age of 49 on the 2nd June 1952.”

Among more affordable lots in the auction is a hurl “reputed, by tradition,” to have been used by Nicky Rackard during the 1955 All-Ireland Final, when his Wexford team beat Galway, estimated at €350-€500.

According to auctioneer George F Mealy, “the GAA icons of yesteryear continue to be revered” and demand for and interest in GAA memorabilia “has appreciated on a steady upward curve in the last couple of years”.

This was because both fans and collectors appreciated the significance that the organisation played in the nation’s daily life “at parish, national and international level”.