Fine collection owned by Dev’s doc goes under the hammer 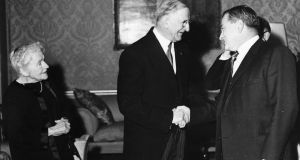 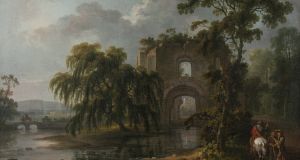 The first big auction of the autumn season in Dublin will feature a collection of art and antiques owned by the personal physician to Éamon de Valera and Charles Haughey.

Dr Bryan Alton, a consultant physician at the Mater Hospital, died in 1991. The collection remained in the ownership of his wife Winifred (née Tempany) until her death last year and is now being sold by the family. Dr Alton and his wife were well-known collectors who bought from auctioneers and dealers in Ireland and overseas. Over 300 items including furniture, porcelain, silver, objets d’art, old master and modern paintings, religious icons and various collectibles that they acquired from the late 1940s to the 1970s will go under the hammer at Adam’s saleroom in St Stephen’s on Tuesday September 6th.

Dr Alton was personal physician to the late president Éamon de Valera and was also an elected member of Seanad Éireann (for the NUI panel 1965-1973). According to the catalogue notes: “When de Valera retired in 1973, the new president Erskine Childers naturally had his own doctor, but Bryan was at a dinner in 1974 where the president had a massive heart attack and it was he who attended to him and went with him to the hospital.”

In the 1980s, Dr Alton was personal physician to taoiseach Charles Haughey. He also served on the board of Ansbacher Bank.

‘Boundless energy’[/CROSSHEAD] James O’Halloran of Adam’s, says Dr Alton “was a man of boundless energy and formidable intellect, a philanthropist and family man.” He had served as president of the Royal College of Physicians of Ireland and also as master warden of the Corporation of Goldsmiths and on the board of the National Gallery of Ireland.

Over one-third of the lots in the auction are pieces of silver and among the highlights are Lot 11, a fine set of four Irish Georgian silver table candlesticks, made in Dublin by Michael Cormick and William Townsend circa 1760, which are estimated at €12,000-€14,000; and Lot 17, six Georgian silver boat- shaped salts [salt cellars] by John Young of London, which date to 1790/92 and are estimated at €1,500-€2,000.

While the collection includes a few pieces of modern art, Adam’s said: “Old Master paintings were where Dr Alton’s passion lay,” and he “purchased many fine works from international art dealers”. Among the highlights are Lot 168, a 1661 painting by Utrecht artist Joost Cornelius Droogsloot depicting a group of figures on a bridge outside a village and described as “a fine example of work from the golden age of Dutch painting” (€8,000-€12,000); and Lot 235, a mountainous landscape with horse and rider by Flemish painter Marten Ryckaert (1587-1631) which is estimated at €10,000-€15,000.

Passion for porcelain[/CROSSHEAD] Adam’s says porcelain was another of Dr Alton’s passions and the sale includes some remarkable pieces of 18th-century Meissen, most notably Lot 200, the 16cm high ‘Indiscreet Harlequin’ which depicts a scene from the Commedia dell’ Arte as modelled by JJ Kandler estimated at €25,000-€35,000 .

Amongst the furniture, Lot 169 is described as “a spectacular George III inlaid and painted sycamore bowfront side cabinet, fashioned in the manner of London cabinet-makers Mayhew and Ince, the quality of the manufacturing and decoration being of the highest level” (€15,000-€20,000); and Lot 223, “a wonderful pair of George III inlaid mahogany diningroom pedestals and urn, after a design by Gillows”, estimated at €5,000-€20,000.

A selection of Middle-Eastern and Mughal [Indian] miniature artworks includes Lot 180, an oil-on-ivory view of the court of the Mughal Emperor Aldwar Shah II at Delhi c.1820, “where a long-haired prince is being tried over his discharging a pistol at the British resident at Delhi, Sir Charles Metcalfe” (€6,000-€8,000) .

Fans of Art Déco will be interested in Lot 125, a bronze and ivory figure of The Turbaned Dancer by French sculptor Paul Philippe, estimated at €3,000-€5,000.