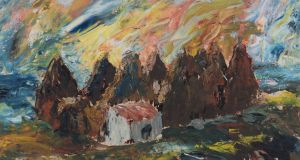 Burning of the Kelp on Clare Island, by Tony O’Malley 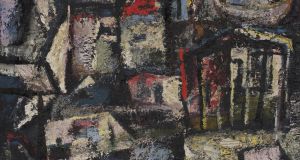 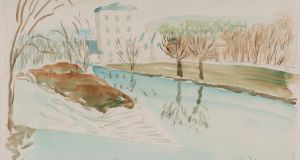 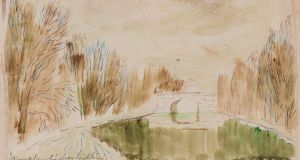 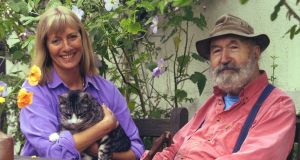 The legacy of the prolific Irish artist Tony O’Malley, who died in 2003, is turning out to be the gift that keeps on giving.

In March this year, two of his paintings came to light which, when reversed and joined up, revealed a lost Francis Bacon nude, which sold at Christie’s in London for over €500,000, more than 14 times the top estimate.

Now some more unknown paintings by O’Malley from the 1950s have turned up at Dolan’s Art Auction House and will go under the hammer on Monday, August 1st in Ballyconneely, near Clifden, Co Galway.

The paintings have been consigned by an unnamed vendor who inherited them from his mother; she had acquired them directly from the artist in the 1950s in New Ross, Co Wexford. O’Malley was then a struggling artist in his 40s, living in New Ross having quit his job as a bank official to pursue his dream of becoming a full-time painter.

According to auctioneer Dr Niall Dolan, O’Malley was “self-conscious of his position as an artist” but “not at all shy or standoffish”, had “played the mouth organ at his local pub in New Ross” and “people in general, and women in particular, were very fond of him and found him very attractive, almost to the point of mothering him”.

Dolan said the vendor’s mother had heard about the artists’ colony from an article in the New Statesman and encouraged O’Malley “to first go on a holiday to St Ives in Cornwall and, a couple of years later, to move permanently to St Ives”.

The paintings, which recall O’Malley’s time in New Ross, will be auctioned in three separate lots.

Lot 142, Burning of the Kelp Stores on Clare Island, an oil-on-paper estimated at €1,500-€2,500, is described as “ a very interesting historical work – Tony’s father was from Clare Island and moved to Callan, Co Kilkenny, working as a Singer sewing machine salesman, where he met and married Tony’s mother. It was on a visit to Clare Island that Tony witnessed the burning of the kelp stores and recorded it in his painting”.

Lot 143, Bennettsbridge Mills in April, a watercolour dated 1953, depicting the mill on the Nore in Co Kilkenny that is now home to the Nicholas Mosse pottery is estimated at €800-€1,200. The buyer of this lot will, like the buyer of the “Bacon nude” in London, get “two for the price of one” because on the reverse is a watercolour entitled Grand March near Leighlin. The title refers to the month of March and depicts a scene near the village of Leighlinbridge, Co Carlow.

The auctioneers said both are “typical of the small works on paper which Tony produced in the 1950s at a time when he had left the bank and was travelling around in his first motor car, many of these works being painted on the spot.”

In St Ives he met the Dublin-born Francis Bacon who had also moved, temporarily, to Cornwall. But Bacon left after a few months and the woman who had rented Bacon a studio reputedly gave away his discarded canvasses to other artists – including O’Malley – who re-used the materials.

O’Malley cut in half a board on which there was an almost life-size unfinished image of a male nude by Bacon. He used the reverse of each half to make two paintings of his own: Currach, Clare Island and Evening Landscape, Tehidy Hospital, which were sold as a pair at Christie’s on St Patrick’s Day for £435,000 (€554,000). The first painting had been gifted to the Irish poet Padraic Fallon who died in 1974 and the second was owned by O’Malley’s widow, Jane Harris.

In 1973, O’Malley married Harris, a Canadian artist, and after some time living and working in the Bahamas returned to his native Callan in 1990. He was elected a saoi of Aosdána in 1993. He died in 2003.

His paintings frequently turn up at auction. Until the Christie’s auction of his Bacon pair, the highest price paid for an O’Malley painting at auction was in Dublin in 2006 when Garden Impression, Paradise Island, Bahamas sold for €77,000 in a joint sale conducted by Adam’s and Bonhams.