“Darling Mummie” the Easter Rising was an “awful tragedy” 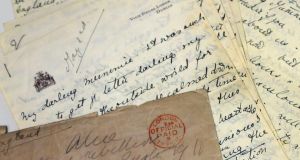 Letters written by the Vicereine, Lady Wimborne, wife of the then Viceroy, and effectively Ireland’s “first lady” at the time of the 1916 Rising.

Mementos associated with Ireland’s struggle for Independence during the early years of the 20th century are the main highlights in Whyte’s History & Literature auction in Dublin next Saturday, November 8th. The top lot is an Irish Tricolour, reputedly flown over Dublin during the Easter Rising in 1916, painted with the slogan “Sinn Fein go deo” (Sinn Féin forever), estimated at €30,000-€50,000. A log kept by Dublin Fire Brigade’s ambulance service during the Rising, which was “rescued from a skip” by the vendor’s grandfather, is expected to fetch €3,000-€5,000.

But some of the lots reflect the historical events from the perspective of the British establishment that ran Ireland until 1922. Two uniforms which belonged to Gen Sir John Maxwell, the British army leader who was dispatched to Dublin in April 1916 to suppress the Rising, will be offered as a single lot with an estimate of €15,000- €20,000.

Two letters written in May 1916 on notepaper headed ‘Vice Regal Lodge’ – the house in the Phoenix Park, Dublin today known as Áras an Úachtaráin and the official residence of President Michael D Higgins – are estimated at €1,000-€1,500. They were written by the Vicereine, Lady Wimborne, wife of the Viceroy, and effectively Ireland’s “first lady” at the time.

Her husband, Lord Wimborne, was the King’s representative – lord lieutenant – in Ireland. Like the rest of the ruling British establishment, the couple were surprised by the Rising and trapped in their residence for about a week after the Rebellion broke out on Easter Monday, April 24th.

On May 2nd, Lady Wimborne received post for the first time in nine days and immediately replied to her mother, Lady Ebury at her home in Rickmansworth, England. The letter begins: “My darling Mummie . . it has all calmed down now but it’s been a terrible time. One more awful tragedy in this beloved land.”

She and the Viceroy “had been anxious about Sein Fane [sic, she misspelt Sinn Féin] for some time past”.

She recalled the events of Easter Monday: “I was washing my hands for luncheon when I was rung up and told to stay in my bedroom. Sein Faners had attacked the Castle and might come here”.

In the event, the Vice Regal Lodge was not attacked by the rebels but Lady Wimborne believed she and her husband were “absolutely defenceless and at the mercy of the enemy” despite having “ten men on guard”. Many of the servants had already been sent to Belfast by train because the couple had been planning to visit the city for a “big dinner” and so were left in Dublin and “found ourselves with two footmen and two A.D.Cs (aides-de-camp) and the clothes we stood up in”.