Can you tell your art deco from your mid century modern? 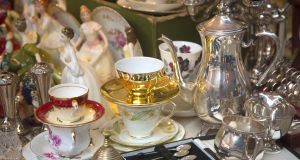 “Our students are always interested in silver,” says Roxane Moorhead. “And at auction, it always sells.”

The Institute of Professional Auctioneers & Valuers (IPAV) has announced its programme of courses in fine and decorative arts for 2018/19.

Along with a diploma course, which runs for two days a week from October to May, it will also offer an evening course on Monday nights from October to the end of February, and a 10-week lecture series on Tuesday evenings. All lectures will be held at the IPAV headquarters at 129 Lower Baggot Street in Dublin.

The three courses are, says the IPAV’s course director Roxane Moorhead, tailored to the needs of different kinds of students.

“We have young people who are preparing to get into one of the art schools; and we have a couple of ladies in their 80s who have been coming to our courses for years,” she says.

Though the courses are primarily educational they’re also very enjoyable, with outings to private houses, gardens and sale rooms included in the mix.

“People form friendships,” says Moorhead. “And we encourage them to join the Georgian Society, the Friends of the National Gallery and other organisations. They also do lots of talks and outings and so forth, so students can pursue their particular interest with another group of people. ”

The diploma course covers a wide range of topics, from the history of painting to domestic architecture, furniture and silver to the history of costume. It also examines the art of interior design, the role antiques can play in the decoration of the home, and the evolution of garden spaces.

Although the IPAV is not affiliated with a university or other third-level educational body, this diploma is recognised within Ireland as a starting-point for those who wish to pursue a career or a university course in the area of fine arts.  The cost is €2,750.

The Tuesday evening lecture series is intended as a wide-ranging taster for anyone with a general interest in the fine and decorative arts. This year’s talks will look at “Art and Antiques in the Changing Market” – and as well as two scheduled talks every week, will include visits to auctions and antique shops. It costs €650.

The third course for the coming academic year, “American Beauty: Art and Culture of the United States”. It costs €795 but is already fully booked up.

The interior designer Christopher Moore will talk about both interior and garden design. James O’Halloran, managing director of Adam’s auctioneers on St Stephen’s Green, will focus on the practicalities of the art market in Ireland.  Robert O’Byrne will explore the history of great Irish houses; Jessica Cunningham will get up close and personal with Irish silver.

As well as organising the courses, Moorhead is one of the IPAV’s principle lecturers. Her personal passion is the history of furniture.

“Especially 18th-century furniture,” she says. “But I like art deco too. I like to be able to mix – that’s what I’m always trying to teach the students. You don’t have to stick to just one style.”

Does she have a theory about why art deco is so popular with collectors just now?

“I think because it’s clean cut,” she says. “ It has nice lines and it looks modern – if it doesn’t sound too strange to use that word about pieces which can be almost 100 years old.

“But people do like art deco, and they like chrome and steel and glass. The problem is that high art deco or true art deco is beyond all our means – and so there’s a lot that’s not genuine. It might actually have been made in the 1960s or 1970s.”

With three decades of experience as an antiques dealer behind her, Moorhead is well placed to observe the changes which have taken place in the market in recent years.

“Now it’s quirky things that sell,” she says. “When I started out, you couldn’t keep porcelain on the shelf. I used to have a man – a dealer – who came to me every Monday. I’d buy it cheap from somebody else and he’d buy it from me. He’d spend a thousand every week – which was good money in the 80s.

“But there’s nobody collecting porcelain now. Nobody wants dishes. Nobody wants clutter in their houses. Though I do notice that young people like the odd decorative piece.”

Happily, there are areas of the market where beautiful objects are still in great demand.

“Our students are always interested in silver,” Moorhead says. “And at auction, it always sells. It doesn’t make records unless it’s provincial, or something really special, but it’s steady.

“And then there are paintings. If people have a bit of money they’ll always buy a painting.”