Bust of ‘Man of Aran’ star

Portrait of ‘Tiger King’ to be auctioned next month 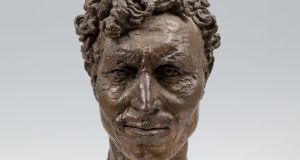 Man of Aran, a 1930s film about life on the Aran Islands directed by Robert J Flaherty featured a cast of locals rather than trained actors. Among them was Colman King, otherwise known as “Tiger King” – a blacksmith, fisherman and currach builder – whose rugged good looks inspired English sculptor Jacob Epstein to ask him to model for a portrait bust. Epstein, who was later knighted, was already famous for sculpting the stone tomb over Oscar Wilde’s grave in Paris.

Six casts of the bronze bust were made. Some are in museums, including Dublin’s Hugh Lane Gallery, but one of two reputedly still in private ownership is to be auctioned in the Adam’s St Stephen’s Green saleroom next month. Portrait bust of ‘Tiger King’, Man of Aran is estimated at €4,000-€6,000. Art historian Dr Éimear O’Connor described it as “symbolic of an important moment in Irish cultural history”. Man of Aran was released in 1934 and won the Mussolini Cup – for best foreign film – at the Venice Film Festival. Earlier this year a bronze bust of George Bernard Shaw by Sir Jacob Epstein, made £43,750 at a Christie’s auction of British and Irish Art in London.