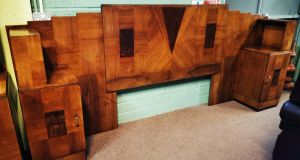 Cavan-based auction house Victor Mee will hold its March decorative interiors sale on Wednesday and Thursday, March 3rd and 4th. As with all other Irish auction houses, viewing is on an online-only basis due to health restrictions, but Mee has condition reports and additional photographs for the 822 lots.

It is a mixed offering, which makes the catalogue quite a compelling read. It lists everything from a mounted swordfish bone, reaching almost a metre in height (lot 466, €100-€200), to two basalt stones from beside the Giants Causeway in Co Antrim. Formed 60 million years ago, when molten lava cooled slowly, these columns are unusual and quite striking shapes.

The Giants Causeway, now a Unesco World Heritage Site, was a commercial quarry from the 1940s to the 1960s, as was Craigahulliar, a short distance away, which has similar stones originating from the same lava flow.

It was opened in 1909 and operated by the Giants Causeway Columnar Basalt Company and later by the Portrush Columnar Basalt Company, which closed in the 1980s. Stones from the quarry were used in the construction of walls, and indeed houses along the Antrim Coast, and can sometimes be found when old houses are knocked down. Mee expects international interest in the basalt columns and each are expected to fetch between €200 and €400.

Two clocks from the art deco period also feature: a tall oak granddaughter timepiece with an enamel dial (lot 658, €60-€120) and a mantle clock with silver dial (lot 172, €30-€60). A number of lamps, ceiling lights and a brass dancing figure from the period are also listed.