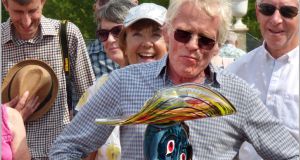 Now in its 40th year, Antiques Roadshow is one of the most popular and long-running factual programmes on the BBC. In 2005 the series engaged a glass specialist, Andy McConnell or Decanter Man as he is popularly known, one of Britain’s foremost authorities on glass who has accumulated more than 30,000 pieces over his lifetime.

Author of three books, with a fourth in progress, he regularly lectures on the subject of antique glass, in addition to his career as a specialist on the BBC show. Twelve years ago he opened his own shop Glass Etc, Antiques and High Class Junk in his hometown of Rye on the Sussex coast, which has won England’s “Antique Shop of the Year” for the past five years.

McConnell, who describes himself as a “hardcore nutter” on the subject of antique glass, will deliver a charity talk entitled Beyond the Roadshow at the Great National South Court Hotel in Limerick on July 21st, and attendees are encouraged to bring along pieces of glass for appraisal.

Though interested in antiques since the age of 14 – his parents were part-time dealers – his first job at the age of 21, saw him head for Hollywood where he worked as a rock music journalist, with the self-described hippie “hanging out with The Grateful Dead and Led Zeppelin”.

In 1977, after an offer to tour with Jefferson Starship, the American psychedelic rock band who, as octogenarians, are still touring today, McConnell met an antiques dealer in Germany “and got caught up in the antique glass trade”.

He is particularly passionate about Irish glass, as “it reflects the character of a people that you don’t find elsewhere in the world”. He specifically refers to the rare decanters engraved with the words “The Land We Live In – The Land We Left Behind”, which were popular with Irish exiles, and forms a part of his own personal history.

“My family were forced to leave Ireland during the Famine, and these decanters were taken by Irish people abroad as a lament to the harsh realities they were fleeing from,” he says. Engraved on either side with the mottos, people would first toast the land they had arrived in, and subsequently toast the home that they had left. “These decanters were the shared vessels that unified Irish emigrants, though few remain in Ireland,” explains McConnell.

It’s not the monetary value of antique glass that excites him but its link with history : “After 14 years on Antiques Roadshow, I have learned that people are interested in far more than money; it is for us, as soulful beasts, a connection with a piece that is far more important.”

McConnell will be on the lookout for rare decanters, particularly those engraved at the base with the name Mary Carter, a Dublin retailer who commissioned Irish glass companies to brand pieces for her shop in the late 1700s, which are highly sought after, he says. But he’s also encouraging people to “bring a wheelbarrow load if you have them, in the hope of finding something really juicy to knock people over”.

Admission to the event, which is organised by Hibernian Antique Fairs, is €15 for adults and children are free, with all proceeds going to Mental Health Limerick and Friends of the Hunt Museum.

What is the going rate for a home in Co Donegal?
9