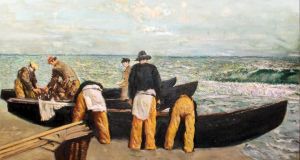 After Adam’s and Whyte’s in May, the last of the “big three” Dublin summer art auctions takes place at de Veres on Tuesday.

Some 160 lots of mostly Irish art will go under the hammer in the Thomas Prior Hall, Bewley’s Hotel in Ballsbridge at 6pm.

Also estimated at €40,000- €60,000 is Unloading The Catch by Seán Keating. In a catalogue note, Keating’s biographer Dr Éimear O’Connor says his paintings of the Aran Islands, its people and their traditional working methods “proved extraordinarily popular; several were shown to critical acclaim in major exhibitions in Ireland, England and North America, and he received many private commissions for scenes such as that illustrated in Unloading the Catch”.

‘We poured our hearts and souls into it’: Last orders as landmark pubs and restaurants sell up
5

Why your muscles feel sore a day or two after exercise, and what to do about it
10