Finding your thrill on blueberry hill 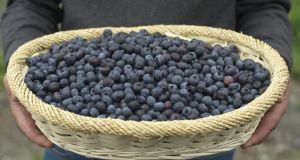 I ate five whole blueberries from my garden this year. Yes, yes, I know, it’s a risible amount, especially when compared to last year’s bountiful harvest of 25. Even more pitiful is the fact that the berries came from not one, not two but three bushes, each one planted into its own large tub of ericaceous compost. But if there’s any consolation to be had, it’s that I’m just one of many Irish gardeners who struggle to grow these delicious, vitamin-rich berries in any quantity.

So what are we doing wrong? To find out, I visited Ballyteague Blueberries, the Kildare blueberry farm of Mark and Eileen Farrell.

Mark and Eileen are the proud owners of over 6,000 blueberry bushes, which they grow in neat lines in the peaty fields next to their house, as well as in a nearby nursery. Some of the oldest specimens are over 20 years old, and were originally planted as part of a community-based project that ran slowly adrift. By the time the couple took over the venture in 2008-2009, the tall bushes were buried beneath a knee-high thicket of weeds.

Restoring the plantation to full productivity while avoiding the use of harmful chemicals such as weedkillers and fungicides involved a great deal of hard, physical work. “But both of us wanted to grow the fruit in as sustainable a way as possible, so we decided to look after each bush as if it was growing in our own garden,” explains Eileen.

Helped by family members and a small team of seasonal workers, Mark and Eileen start harvesting the fruit in July for delivery to local shops, businesses and large chain stores such as Dunnes Stores and Aldi. Even in mid- September, many plants are still weighed down with plump, sweet, juicy blueberries that are mouth-wateringly delicious. In fact, one of the first things I discover is that these Irish-grown blueberries taste far, far nicer than their imported equivalents, which are picked before they’ve properly ripened to allow enough time to ship them long distances.

“By the time they’re for sale in Irish shops, imported blueberries have coloured-up enough to look ripe, but they don’t taste anything as good as ours, which have been picked at just the perfect moment of ripeness,” says Mark. The next thing I learn is that patience is a considerable virtue when it comes to growing your own blueberries, as the long-lived bushes take a surprisingly long time to reach full productivity.

“Gardening books will tell you two to five years, but it really takes about 10 years before they reach that stage,” explains Eileen. ‘By then, they should be producing an average annual harvest of between 0.5 and 4kg of berries.”

Choice of variety is another important consideration, especially when it comes to frost-tolerance and times of flowering. In a cold garden, a harsh, late frost can seriously lower yields by damaging the plants’ blossom and thus its ability to produce fruit.

One of the varieties growing in the fields of Ballyteague Blueberry farm is the mid- season, compact “Chippewa”, which was bred by the University of Minnesota in 1996 (the majority of blueberry cultivars are American-bred). While it produces exceptionally large, sweet, delicious berries with a firm, almost meaty texture, it suffered badly during those aforementioned cold Irish winters and is less tolerant of very low temperatures than the ultra-reliable, all-rounder that’s “Bluecrop”.

Although first introduced to cultivation in the 1940s, the latter (a mid-season variety) is still hard to beat in terms of its frost- tolerance, yields, length of fruiting season, disease-resistance and general dependability.

Other especially hardy varieties growing at Ballyteague Blueberry Farm include the early-cropping, adaptable “Northland” and the tangy, sweet “Spartan”, yet another early variety. But one to avoid, warns Eileen, is the late variety “Elliott”.

“I often seen young plants for sale, but I’d never advise growing it as the berries are sour and small.” Choice of cultivar/ variety aside, blueberry plants need a moisture-retentive but free-draining soil with a low pH and in full sun.

The plants also need an annual spring pruning to create an open goblet-shaped plant and encourage fruit production. Using a sharp secateurs, aim to remove between a quarter and a third of the oldest branches and the tips of long stems. At Ballyteague they also give the plants a balanced granular fertiliser (one suitable for ericaceous plants) in spring.

As the fruit ripens, they then stake/ support the plants to prevent damage to heavily-laden branches.Young blueberry plants should planted in spring, spaced roughly 1.8m apart and with 3m between rows. They can also be grown in large containers, but bear in mind that the plants crop much better when planted in a group (this aids pollination) rather than as lone specimens.

After that, the only other major consideration is birds. In the middle of Ballyteague’s blueberry fields is a giant metal pole. Attached to it is a kite in the shape of a hawk. When the wind blows, it hovers threateningly in the air, floating high over the blueberry-filled fields, but even it isn’t enough to prevent the local bird population from happily helping themselves. Not that I’d blame them . . . (See ballyteagueblueberries.net.)

Life after Grand Designs: ‘The house will never be finished’
6