Every Dublin rental has a dark brown fake leather couch

Anyone paying €1,800 a month for a one-bed deserves a standard-sized double bed 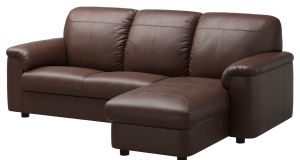 My German friend eyed up the ubiquitous brown leather couch. ‘Oh, it’s so ugly. Do you think the landlord might consider changing it?’

We all know the one I mean. I’m sure you could picture it now with even the briefest of descriptions. Perhaps you even have one in your own property. Yes, it’s the PVC leather-look couch, usually dark brown or black. It can be a two- or three- seater. A staple in all Irish rental properties. And I mean all.

I know this because I have been researching the one-bed Dublin city apartment market on behalf of a German friend and her husband who are moving here (she’s taking up a job with Google). So far my research has revealed two things.

One is that there are no one-bed apartments to rent in Dublin city centre for less than €1,800/month. The second is that very apartment in Dublin seems to be kitted out with the same dark brown fake leather couch.

It would be nice to see a tweed couch or even the leather one in a different colour. I spotted one variation on Daft.ie, in an apartment block on Hanover Dock, a stylish charcoal grey tweed corner couch. I nearly wept for joy.

Of course, foreign nationals who move here are often surprised that Irish properties come furnished at all. They are more used to properties being let unfurnished. (The Germans even remove the kitchen, as I found out inconveniently many aeons ago.)

Securing appointments to view the apartments was the next task, which in itself is no easy feat. Demand vastly outstrips supply, so without the right credentials (a job and references) you won’t even get on the viewing list.

In the Docklands area, competition for the best affordable accommodation is even more acute. As we queued to get in the door of the last one-bed in Dublin (or so it seemed), it quickly became obvious that every second person there – no, make that every person there – was also a new Google recruit (a Noogler!), young and, like my friend, non-Irish.

She eyed up the ubiquitous brown leather couch. “Oh, it’s so ugly. Do you think the landlord might consider changing it?”

I indicated the crowds milling around us and looked at her pointedly. Really? But we asked anyway.

“No,” replied the agent, politely but firmly. “Properties are let as seen.”

And this was the third important thing we learned. Properties are let as seen. So if you don’t like the couch or the curtains or the artwork on the walls but the next person in the queue who is just as suitable a tenant as you doesn’t mind . . . well, landlords tend to take the path of least resistance.

To be honest, the landlord could have taken a slash hook and a pot of orange paint to the couch and this apartment still would have been let by the end of the day.

In the end, the deal breaker for my German friend in terms of the “let as seen” rule wasn’t over the couch anyway but the bed. She looked in disbelief at what looked to her like a large single. I pointed out that it was in fact a 4ft x 6ft small double put in there to make the room look bigger.

She knew what this meant. As a couple seeking accommodation in a one-bed apartment, she and her other half were going to have to cram themselves into that tiny space for an entire night hoping to God that they would get through to morning without any serious bruising.

In my friend’s case dragging herself into a 7am “fun” breakfast meeting in Google would be followed by five hours of induction training and a team-building night out later that evening.

Andreas would surely be kicked out on to the couch . . . oh yes, the couch.

Well, look, there’s an off-licence around the corner, I suggested helpfully. Maybe you could have a nice bottle of vino on standby, or better still a bottle of Irish whiskey to aid some level of unconsciousness before bedtime? We Irish have been making ourselves nightcaps for years now, and all the time it was because our beds were the wrong size. Who knew?

I should have known that the bed sizes here may pose a problem for her. In Germany the double beds are in fact two separate single-size mattresses within a double frame with a divider down the middle. The idea that in Ireland we actually attempt to share the same mattress with another person, no matter how big the bed – they find it a slightly masochistic act.

“But how can two sleep on one mattress?” they asked.

“I really don’t know,” I answered, equally surprised that we are doing this.

“The movement of one will keep waking the other, no?”

I understand about the leather-look couch, I really do. They are hard-wearing, easy to clean and suitable for anyone with an incontinent guest staying over. But anyone paying €1,800 or more a month for a one-bed deserves at the very least a standard-sized double bed (4ft 6in wide, 6ft 3in long) with a good (new) mattress.

Next size up is the King, which measures 5ft across and 6ft 3in long. Smaller one-bed apartments might be too small to fit a 5ft bed, which is the reason the standard and smaller doubles are popular. Standard doubles are still small by European standards, but a small double which measures only 4ft across is really not suitable for a couple.

Couples from overseas, you have been warned: check the bed size. If there are fewer people interested in your chosen apartment you may have latitude to ask the landlord to change or even remove the bed so you can get yourself a more suitable model.

As for the brown pvc couch, well, there are some nice throws in Ikea.

Coronavirus anxiety keeping you awake? Here’s how to get more sleep
3