‘It’s a joyful, soulful place to live’: The farmhouse comes with a hostel and campsite 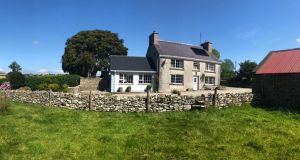 The farmhouse along the Wild Atlantic Way in Co Donegal.

Four Donegal sisters are the latest to embrace a prize draw method to sell a rural family home and raise funds for charity along the way. The Gallagher sisters are offering £10 tickets for the farmhouse where they grew up on the Wild Atlantic Way, along with a stone hostel, campsite and outbuildings. The winner will also receive a £50,000 cash bonus. A key driver of the initiative is the family’s pledge to donate 5 per cent of the entire draw proceeds to Beaumont Hospital’s neurosurgery department in honour of their parents who died eight weeks apart in 2018.

The sisters, Johanne, Susan, Marcia and Dorothy Gallagher, grew up in Darney near Killybegs, and are a well known family in the area. Their parents Ben and Australia-born Lyndall ran a hostel beside the farmhouse for years. Ben suffered a spinal injury as a young man, and had to learn to walk again, while in 2016 Lyndall was diagnosed with a brain tumour. Ben died in March 2018 and Lyndall died eight weeks later. If all 150,000 tickets sell the family will raise £75,000 for Beaumont Foundation.

The property on 1.59 acres (0.64 hectare) is located between Donegal town and Killybegs not far from the recently extended holiday home of actor couple, Sarah Jessical Parker and Matthew Broderick. It includes a farmhouse with a modern extension and amenities as well an adjoining second property that was previously used as a seasonal hostel and camping site. The property had been placed for sale seeking about €450,000 but following Brexit and Covid-19 the family took it off the market. The draw launched last Friday and Susan Gallagher Ryan says 4,500 tickets have been purchased so far.

Speaking to The Irish Times, Gallagher Ryan said: “It’s lovely to think a person could win this house for just £10, and the £50,000 could be start up money for a new business and a new life here in Donegal. It’s a joyful, soulful place to live, everyone who comes to the house has felt it, there’s something about it.”

In August last year a Canada-based Irish couple raised almost €1 million for Covid-19 healthcare workers here after placing their 150-year-old Mayo cottage in a similar draw. All of the funds raised from the €50 tickets went to charity, with a woman living in Dublin’s Stoneybatter winning the property after buying a single ticket.

Tickets for the Donegal draw are £10 each and available through UK site raffall.com. The winner will be selected on May 14th.