Donegal island at an 82% discount 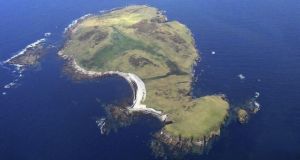 Inishdooey Island: the 96-acre outcrop lies three miles off the mainland and is owned by Falcarragh man Mark McClafferty, who inherited the property from his late grandfather Vin Duggan

Isola di Mal Ventre, off the Sardinian Coast, is making headlines as the only remaining private island available for purchase in the Mediterranean. It comes with an asking price of about €1.58 million.

Closer to home, a slightly chillier – but more affordable – prospect might be Inishdooey Island off the Donegal coast, part of the Donegal Archipelago which includes Tory.

Inishdooey has been seeking a buyer since 2011 when it came to the market asking €1 million through German agents Vladi.de.

The 96-acre outcrop lies three miles off the mainland and is owned by Falcarragh man Mark McClafferty, who inherited the property from his late grandfather Vin Duggan. At the time the owner told Donegal Daily that he considered the asking price to be “a bit steep”.

Not surprisingly, the price tag has since been slashed by 84 per cent to a considerably more reasonable €175,000. Before you call your bank manager consider the prohibitive cost of transporting building materials to the island, cautions local contractor Seamus McClafferty, who estimates it will cost between €200,000 and €250,000 to build something modest.