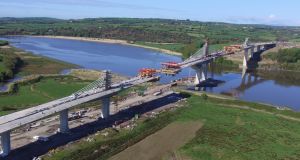 Co Wexford, in the sunny southeast has chocolate-box pretty thatched cottages, an array of fine-sized bungalows on large plots and boom-era holiday homes in good supply.

The east of the county boasts some of the best connectivity to the capital. A train line runs from Rosslare, while more than 40km of new motorway and dual carriageway deliver vastly improved travel times and improved road safety.

Residents in the south of the county are counting down the days until the last leg of the M11 between Camolin and Enniscorthy opens on July 31st. This will give freewheeling access through the county and will make a big difference to visitors and commuters, says Ciara Slattery of Warren Estates Slattery. “It will give Enniscorthy town a chance to breathe. It will free up Ferns and the whole area south of Gorey. It now means there’s a motorway all the way to Rosslare.”

New Ross will be bypassed later this year by the N25 crossing the Rose Fitzgerald Kennedy Bridge and scheduled to open in November. Agent Anne Carton of PN O’Gorman says the mood in advance is optimistic because there is also talk of extending the Waterford greenway, from Bunmahon to Waterford city east with an announcement on its funding application due in the next few weeks.

Wexford’s farming background is evident in its strawberry fields, the new spuds and other local produce for sale on the sides of the road but there are now as many newcomers as locals, at least in the environs of Gorey, Slattery says, where she estimates 50 per cent of the population originally lived in Dublin.

But the Gorey market has streamlined in the last 12 months, she says. “Interest is still there, as long as properties are priced accordingly, but instead of half a dozen buyers chasing any listing, there is now interest from two or three parties.”

It’s a micro-market in itself and influenced by what’s going on in Dublin because it is within commuting distance. For commuters, the broadband speeds are as important as a property’s Ber-rating, says James Kinsella of Sherry FitzGerald O’Leary Kinsella. It’s the first question they ask, he says, citing The Hatch Lab, where there is a choice of three service providers, as a remote office for many commuters who hotdesk two days a week, journeying to Dublin on the other three.

The median asking price for a property in the county now stands at €195,000, unchanged from the previous quarter, but up 5.4 per cent on this time last year, according to the latest MyHome.ie Property Report in association with Davy.

Wexford has more stock for sale than other commuter counties, about 25 per cent more than Wicklow, Kildare or Meath, and this illustrates its active second home market, which Colum Murphy of Kehoe & Associates estimates accounts for about 15-20 per cent of the overall county sales.

But the sheen has gone off period properties a bit, Murphy says. “The once-in-a-lifetime opportunity used to elicit plenty of interest with properties often sold at auction, but these are now harder to sell.” He’s currently selling Aran, a handsome creeper-clad Georgian four-bed on 15 acres outside Crossabeg, west of Ferrycarrig, and seeking €850,000.