Camp it up for the return of the carvan

All hail the return of the caravan 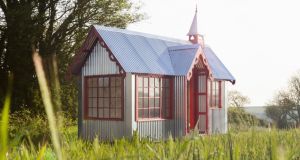 Summer living is about kicking back and spending as much time outdoors as possible.

A Cornwall-based couple have redefined that concept, reimagining the caravan concept to create an embellished abode that looks nothing like the cribs of your childhood holidays.

The designer domicile by Love Lane Caravans is inspired by the tin tabernacle, a nickname for the large-scale worship prop that Victorian preachers used to take on tour to help spread the gospel.

Few remain either here or in the UK. St Peter’s Church in Laragh, Castleblaney, Co Monaghan is one that was restored last year by Laragh Heritage Community Group but it was St Mary’s Church in Cadgwith, Cornwall that caught the eye of Anna Bingham, a lingerie designer who worked for Victoria’s Secret, Selfridges, Liberty and Topshop.

She was running a vintage campsite with her partner, Dan Mullally, a tour manager who went on the very kind of road trips that would have made 19th-century preachers’ blood run cold with acts such as Madness and The Waterboys.

The couple was finding it increasingly difficult to source converted vintage caravans so they came up with the idea of making their own from scratch.

“We wanted to pursue new ideas and use our knowledge, and felt we had exhausted our interest in vintage,” Anna explains. “Building in the style of a tin tabernacle gives these mobile homes a story. They don’t feel like a new build. Each is individual and contains architectural salvage and bespoke elements.”

Made of galvanised metal sheeting, the Empire Studio design is picture pretty and has a porch exterior that emulates the original tabernacles. Even from the outside it looks nothing like a caravan save for the fact that is set on wheels and can be transported anywhere.

Inside, the couple has really reimagined the concept. This one has an edgy industrial look featuring large repurposed metal frame windows. The walls are covered in paper by Timorous Beasties, the award-winning Scottish design studio, and costs £350 per roll, and beneath your feet is an oak floor that any home would covet.

In every design they have incorporated salvaged stained-glass panels into the gable wall which links these new builds back to the originals that inspired them.

The timber frame design is waterproof, and thanks to the 75ml of insulation and sound dampening used in the walls and roof it feels far more substantial than any caravan of old. “We wanted to make them as attractive as possible, to embellish and make if fabulous,” explains Anna. This is glamour on wheels.

Is the process different to designing lingerie? “It’s still all about structure and both are gorgeous to look at but the tools and the skills remain the same. You need to have an eye, be very observant and able to put a look together.”

Earlier models proved impossible to transport so the couple had to get practical about the design. Technically they now conform to the size restrictions of the more standard caravan but they are more durable and built to last. “In essence it is a small building on wheels where you have the flexibility to personalise it and it is something that you can pass on to the next generation,” Anna says.

Already the pair is getting calls from Irish clients. But they only build 10 a year. “So your neighbour won’t have one,” Anna says confidently. Not surprising given that they cost upwards of £17,000 sterling (€24,000), excluding delivery to Ireland. But unlike other summerhouses you can get up and change the scenery when you tire of one vista. lovelanecaravans.com

Flourless almond traybake: an Italian classic with an Irish spin
10