Around the Block: Former home of renowned hotelier PV Doyle goes on rental market for €7,000 per month

Thornhill is by far the largest residential property in Mount Merrion 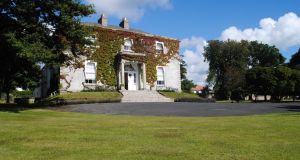 The ivy-clad Georgian mansion, secreted away on a substantial site off Trees Road, was the long-time family home of legendary hotelier PV Doyle and his wife Margaret.

Doyle purchased the substantial period house in 1960 when the house stood on 13 acres.

The canny tycoon did not wait long before redeveloping the property, constructing the Cherrygarth estate on its grounds, comprising more than 50 houses.

Doyle retained about 3.5 acres of land surrounding Thornhill, securing its fate as by far the largest residential property in Mount Merrion. The elegant property has five reception rooms and offers a wealth of original features.

In 2010, Margaret Doyle died, leaving Thornhill to her five children and reportedly wished for the house to be sold, with the proceeds to be divided among Anne, Eileen, Bernadette, Michael and David Doyle.

Given the timing, in the midst of the recession, it would have been very uncharacteristic of the extremely astute family to sell Mount Merrion’s crown jewel for next to nothing – at least relative to their extraordinary wealth.

The property appeared in the property price register as having sold in 2012 for a mere €2 million, however it was acquired by son David Doyle, according to land registry filings.

It should come as little surprise that he has not rushed to occupy the house himself considering he already lives in considerable style in a lavish detached home on Shrewsbury Road.

Land values in Mount Merrion have risen sharply since ownership of Thornhill passed to David in 2012.