Around the Block: Builders set their sights on Rathmichael 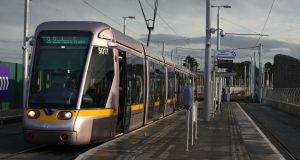 Falls Road in Rathmichael has long been one of the lowest density residential roads within the M50, but that may soon change. Earlier this year, Waterford man David Hall applied for permission to demolish Wyndhurst, a 223sq m house on 2.97 acres, and replace it with 50 apartments in five identical four-storey blocks. The property already had planning for an infill development of four sizeable detached houses to the rear of the existing house. However, due to its proximity to the proposed Cherrywood to Bray Luas extension, and to the existing Bride’s Glen station, Hall recognised its potential for large-scale development. Objections flooded in from locals, including residents of exclusive neighbouring roads worried about the precedent it might set. Falls Road is narrow and has no footpaths, leading planners to refuse Hall’s application.

One individual in favour of Hall’s development was Patrick Crean of New Generation Homes, whose Crekav Landbank Investments is awaiting a planning decision on a recently acquired site next to Wyndhurst. The developer purchased Legende, on 1.53 acres, in March 2015 and hopes to demolish the existing 394sq m home and replace it with three detached and 12 semi-detached houses, each about 178sq m.

While residents have opposed New Generation’s application as vehemently as they did Hall’s, with more than 20 objections lodged, granting of permission may tempt owners of the road’s largest plots to sell. These are worth millions once again after years of worthless development potential. New Generation paid €2.1 million (€1.37m per acre) for Legende; in 2012 Amberley on two acres, off Ferndale Road, sold for €852,500 (about €425,000 per acre).