All for one and one for Youghal 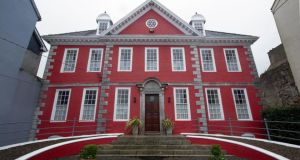 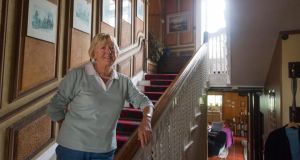 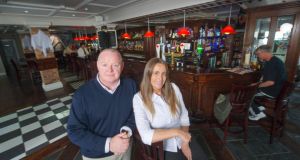 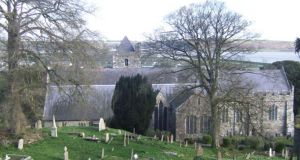 “Look!” says Helen Keane as she shifts a rug on the floor at the Red House. “When we lifted the old carpets this is what we found.”

She has exposed a corner of intricate parquet, a detail of the decorative trim edging the floor of the sittingroom, something like a metaphor for what is happening in Youghal now: the revelation of what is there and the development of its potential.

The glowing terracotta Red House was designed by the Dutch architect Leuventhen as the town house of the Uniacke family of Killeagh, Co Cork. It has been known as the Red House since 1703 when it was built of imported red brick.

Set in a recess of the North Main Street, its domestic version of William and Mary style still suggests a friendly domination of its location between the Boyle alms houses of 1610 on one side and the Red House coachyard, which is now part of the refurbished Old Imperial Hotel on the other.

Across the street is Tynte’s castle, once owned by Sir Robert Tynte who married Elizabeth, the widow of Edmund Spenser.

The Red House was bought by the merchant and justice of the peace Thomas Farrell in 1900. He left his name in the terrazzo of the entrance perron and Helen Keane can point, floor by floor, to traces of his residency. By 1932 this had become the parochial house for Youghal, an occupancy that also left its traces – not least in the upstairs bathroom where the toilet bowl bears the “Cardinal” signature .

While none of these interventions altered the architectural integrity of the house, its internal qualities were so obscured by the time Helen and her late husband Eamon Keane arrived in the early 1980s that Helen thought no one could live there.

But they could and did, finding and loving the Memel pine wood panelling, the drawn glass of the attic windows, the old tiles, the hand-fashioned rafters with timber bolts in the loft, the timber-lined ceiling hidden by stained wallpaper over the staircase, the slender cornices, the occasional flourishes of stucco and the relics of priestly occupation such as the stained glass mater dei over the front door.

After Eamon’s death, Helen continued to honour the couple’s shared commitment to the house and to the town. Fortified by all she has learned about the history and beauties of the house itself, with its walled garden stretching almost to the town walls, Helen is one of Youghal’s most ardent advocates.

Among the others are the FitzGibbon family of Aherne’s Townhouse and Seafood restaurant, Mark Golden and Mark Johnston with their investment in the 200-year-old Old Imperial Hotel, and at the western entrance to the town Nick and Grace Ryan with their elegant upgrading of the Walter Raleigh Hotel.

Walled
So Youghal may be walled, but it’s not walled in. Despite its authentic medieval quality, it displays a modern vitality, and the essence of its current regeneration policy is the productive marriage of the preserved with the contemporary.

It has had a withering few years in terms of unemployment, with 2,000 jobs lost in a decade, but that doesn’t mean that the people themselves are withered or that the town council has put up the shutters on revitalisation. Anything but.

As Keane lifts a rug or points to the hand-made beams in the attics of the Red House, so Cllr Barbara Murray insists that there has to be a light in every shop window along the main street.

Each year the town council gives a grant towards the painting of shop fronts in designated areas, with the colours chosen from a heritage palette. As some of these premises are closed, this might suggest whited sepulchres, but it works by keeping the town looking trim and busy.

Although the building is now empty and for sale, the fine façade of Merrick’s shows well-dressed windows furnished by other businesses.

Barbara Murray can talk the talk for Youghal, and there is a lot to be said. There is the formation of the Youghal Socio-Economic Development Group (YSEDG), which includes members of the South Cork Enterprise Board, the South and East Coastal Area Development group, Enterprise Ireland and the local Chamber of Commerce, which in turn operates the town’s quay side tourist office, which had 36,000 visitors from March to October this year.

Established by the town council and working closely with it, the YSEDG, managed by Aileen Murray, deals pro-actively with funding research and applications, administrative liaisons for tendering, draw-downs and relevant agencies. In other words it unites separate elements and makes life a little easier for them all.

The brightest feather in its cap so far is the renovation of the clock gate, probably Youghal’s single most symbolic building in its assertion of the town’s great maritime heritage, though by 2010 it was run-down and closed. Built as a prison in 1777 and now owned by the town council, the five-storey clock gate replaced the 15th- century Trinity Castle, which was one of the five gateways to the town.

Youghal’s retail and business identity was built on that, for maritime means chandlers, lodging houses, shops, places of refreshment and entertainment, maintenance of quays and streets.

Viewed from its cupola-topped gallery, the town still seems to carry something of that medieval flavour. The narrow curving main street and its high, irregular pointed roofs and gables suggest nothing so much as a romantic image by Arthur Rackham.

Romance is a commodity Youghal is determined to evaluate.

When completed and open, the clock gate project will have cost close to €500,000, but access for visitors is expected to yield as much as €400,000 a year to the local economy.

Driving force
Major funding for the first phase came from the Department of the Environment, Community and Local Government under the European Rural Development programme and, in the meantime, funding for the repair and regeneration for the quays and parking areas comes from the Historic Towns initiative led by Fáilte Ireland and applied to public realm projects.

In terms of current urban management and inspiration, the driving force has been Youghal’s former town clerk, Liam Ryan, who is now managing the municipal government transition programme from Cork County Hall.

Walking the town with Barbara Murray brings the awareness that the small distinctive shops can’t yet quite hold their own against big multiples such as Tesco, Supervalu and Dunnes.

Her determination is to encourage independent retailers, which were the core of the town’s business life even during its years of industrial prosperity.

Believing that optimism can bring optimisation, she has introduced the Beacon Retail Programme initiative to Youghal. She needs more than two hands to list the things that are happening or planned and spells reams of names and titles to indicate each activity marking sustained or renewed commitment to Youghal as a town with a vision for its future.

Hope and faith: Ancient church may be the oldest
When Richard Boyle, the first Earl of Cork, wrote in his diaries of “going home to Youghal”, he meant the house next to St Mary’s Collegiate Church.

Boyle had bought these properties in 1602 from Sir Walter Raleigh who, while mayor of Youghal in 1568, lived in the adjoining house Myrtle Grove.

Boyle lies in his monumental tomb in the church which, in a unique arrangement for the Church of Ireland, is now maintained by the town council.

Standing beneath the recently restored town walls at the eastern end of Youghal, the building remains a centre of worship while also operating as a recital and meeting place. Whether this is the oldest functioning church in Ireland or not will be decided shortly by the results of the dendro-dating of its roof beams, but its vestry records go back at least as far as 1201. Its 15th-century choir of scholars choral was reconstituted in 2005 by organist Ian Sexton and sings the liturgy at St Mary’s.

The town’s bewildering wealth of historic relationships is also witnessed in the “graveyard trail” threaded along the layered slopes from the churchyard to the town walls in a memorial litany of citizens.


Home front: Restoring Clancy’s Bar
Padraig Hennessy left Youghal for America at the age of 18 “when everyone else was leaving”.

A summer job in the local Humble Spud encouraged him to find work in a New York restaurant and he had his own pub in Hoboken, New Jersey, five years later.

Now after 27 successful years in the pub and restaurant industry in America, Hennessy and his wife Catriona have returned to Cork with their two children. His home town is the place where, as he says, he had a wonderful childhood and where “I always felt I could put my slippers on”.

He’s not wearing slippers as he supervises his restored Clancy’s Bar on the Front Strand.

Christy Moore has a song about this legendary premises, a relic of the days when trains brought the population of Cork to Youghal’s fine beaches.

Now designer Stephanie Hennessy has incorporated aspects of the old railway system, from signage to sleepers and a model railway, into the bright expanses of the bar with its comfortable seating and its balcony above the Blue Flag beach, the promenade and the new boardwalk which continues as far as Clay Castle.

After a great summer, Hennessy is prepared for the low season but is committed to what he calls a fantastic town with the right infrastructure.

As he speaks of Youghal’s need for a marina, his son arrives to talk about the Aqua Trek sailing club and its winter leagues. “See?” says Padraig, “Youghal is a place that doesn’t close for the winter.”