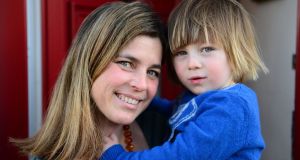 Marianne Marcote with her son, Arlo, at home in Drimnagh, Dublin. Marcote found it difficult to ‘surrender’ to motherhood and believes that coming to it at the age of 39 made it particularly challenging. Photograph: Dara Mac Dónaill

Marianne Marcote was studying dramatherapy at Maynooth University in Co Kildare when she became pregnant with her first child.

Her son, Arlo, arrived during the second year of the MA course and, after she finished her studies, she “completely broke down. There was a lot of anxiety for me and I just basically couldn’t cope.”

The collapse took her by surprise. “This never happened to me before. I am able to manage things,” says Marcote, who grew up in Valladolid in Spain and has worked in theatre all her life.

She found it difficult to “surrender” to motherhood and believes that coming to it at the age of 39 made it particularly challenging.

“You lose control and you lose your life. And when you become a mother late in life, the life you lose is very long. You give birth to the baby, but you have to give birth to the mother as well and that can be a painful process and, personally, it was for me.”

Having undergone huge changes – becoming a mother and qualifying as a dramatherapist – Marcote saw how the two could be combined to help women like her.

She had pre-eclampsia and spent 12 days in hospital around the birth, sleeping very little. So she started motherhood exhausted and this was exacerbated by the demands of breastfeeding.

She has no doubt that lack of sleep was her trigger for rising anxiety and panic attacks. She also felt very irritable.

“You don’t know yourself – it is like where is this coming from? It is what tiredness does to you at a very deep level.”

Marcote, who was always more interested in the process of theatre rather than the presentation, has devised four-week courses that she believes would have benefited her. “Dramatherapy is a creative arts therapy that focuses on the intentional use of theatre and drama processes to achieve healthy psychological growth and change,” she explains.

“It is the creative process that will help participants to gain a deeper understanding of themselves and process the emotions that need to be channelled.”

In addition, Joanne was diagnosed with a chronic illness after the birth of her first child, now aged five, that was linked to pregnancy.

“I was trying to manage an illness as well as a newborn. It was a bitter-sweet experience.”

Two-and-a-half years later she had her second child and, looking back, she thinks she suffered ante-natal depression. She did see a psychiatrist through the maternity hospital, but didn’t go on medication and everything settled soon after her daughter was born.

Joanne believes in a holistic approach to life and has practised mindfulness and meditation, so when she heard about Marcote’s course she was intrigued.

“It was really good – you take what you can from everything and it was a good way to meet other mums as well,” she says. “If you’re suffering from anxiety – and even if you’re not – it is helpful to explore the questions within yourself. It was a safe space to let go of negative thoughts and emotions.”

Marianne Marcote has two upcoming courses at the Oscailt Integrative Health Centre on Pembroke Road, Dublin. Motherhood, a Journey of Personal Transformation is a four-week course for mothers suffering from stress and anxiety, February 23rd, €150. Pregnancy, an Emotional Journey of Transformation is a four-week course for pregnant women, April 8th.