‘When I started thinking that my children would be better off without me, I knew I was in trouble’

The black beast of depression has stalked me all my life, following me no matter how far I try to run 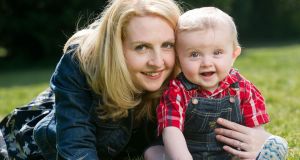 Michelle McDonagh with her son, Jake, when he was just eight months old, in Blarney, Cork. Photograph: Daragh Mc Sweeney/Provision

When I was 13 years old, I cried almost every day for nine months. I had never heard of “depression” or “anxiety” or “suicidal ideation” back then. All I knew was that I was desperately sad and frightened all the time.

Back in 1980s Ireland, there were no depression awareness campaigns, no websites like Reachout and Headstrong, or national network of programmes like Jigsaw, designed to make sure every young person had “somewhere to turn to and someone to talk to”. My parents had no experience of mental illness, and thought I was just having trouble settling into a new school.

The day a school counsellor called me to her office is indelibly imprinted on my memory. It was the day she told me I was spoilt and attention-seeking and had to stop crying. How I wished it was that simple. I tried so hard to plug my tears, to stop feeling sad, but I wasn’t able to. It was the only way the pain had of getting out. Nobody understood, least of all myself.

I have let go of the anger I felt towards that teacher for many years, because I realise now that her actions that day came from ignorance, not cruelty. During the summer holidays that followed, the cloud lifted and I thought that was the end of it.

Little did I realise it was only the beginning, that the black beast would continue to stalk me for the rest of my life, following me no matter how far I tried to run.

Depression is different for everybody. For me, it’s always worse first thing in the morning, waiting to pounce as soon as I wake, groggy with the desperate fatigue that no amount of sleep can lift. At its worst, I feel trapped in my own body under the weight of hopelessness and despair.

Imagine feeling like that from the moment you wake to the moment you fall asleep every day for weeks or months on end. When minutes seem like hours and hours like days. Literally dragging yourself through the day, existing not living, and all the time trying to pretend that everything is okay. That’s what depression feels like.

Depression is standing in a playground on a bright, sunny day watching the three beautiful healthy children you have been blessed with laugh and play, and wishing you were not alive. Depression is what drives a young man in the prime of his life or a mother of young children to take their own lives.

To somebody who has never experienced this illness, these acts seem selfish, but I understand that these people simply cannot cope with the pain any longer.

I was in my late 20s when I realised that no amount of St John’s Wort was going to “cure” me, and I finally gave in, as I saw it, and started on Prozac. I can vividly remember the first day I felt the medication kicking in and my mood start to lift.

I believe my depression is caused by biochemical factors, as depression can pounce even when everything else in my life is going well. I believe antidepressant medication is a vital weapon in the battle against depression and can mean the difference between life and death for many people suffering (and I use that verb deliberately) from the moderate to severe forms of the illness. However, I do not believe it is right that medication is all too often the only weapon available to people.

It was after the birth of my first child seven years ago that anxiety entered my life. The depression and anxiety worsened during and after my second and third pregnancies. I love my children dearly, but I felt trapped because I knew then that no matter how bad things got, I could never leave them without a mother.

Over the years I tried a smorgasbord of different mainstream and alternative treatments to try to fight my depression. Reiki, reflexology, counselling, acupuncture, herbal medicine, nutrient therapy, but nothing ever worked for long. I continued working and acting like there was nothing wrong to the outside world, all the time shadowed by the dark beast.

When Prozac started to lose its effectiveness, my GP switched me from one SSRI (Selective Serotonin Reuptake Inhibitor) to another, trying without success to find one that worked and did not have unbearable side effects. Then one day about two years ago, I decided I had had enough. I somehow found the motivation to complete a couch-to-5km programme and realised that the research was right; exercise really did help improve my mood.

After about two months of running 5km three times a week, I started feeling alive for the first time in as long as I could remember. I had energy, I was able to enjoy and appreciate my life. I was ecstatic at having at long last found the “cure” I had been looking for.

I stopped taking my medication and my mood began to dip and the running fizzled out and by September of last year, I knew I was back on the slippery slope again. When I started thinking that my children would be better off without me, I knew I was in deep trouble.

So I trudged back to the GP who had nothing to offer me, but another SSRI. This time though was different, I had tasted normal life now and there was no way I was putting up with a miserable half life any longer. Determined to find something that would help me to live a normal life, I started researching treatments for depression.

I kept coming across a medication called Bupropion (Wellbutrin), one of the most frequently prescribed antidepressants in the US, but available in Ireland only as the smoking cessation aid, Zyban. I was interested in this medication because it is thought to work on norepineprine and dopamine, unlike the SSRIs which work on serotonin and it does not cause fatigue, weight gain or libido issues.

I was referred to a psychiatrist who agreed to prescribe Zyban off licence as an add-on antidepressant and, after a very rocky start with some nasty side effects, the medication started to kick in around mid-January. My energy, motivation and joy de vivre returned.

Knowing from experience that my depression could become resistant to the medication, I started cognitive behavioural therapy at the Dean Clinic in Cork. CBT involves challenging the constant negative thoughts that cause you to feel bad, to look at the evidence for and against them, and to come up with an alternative thought.

I’m under no illusion that the black beast has gone away forever but what is changing through CBT is that I’m not so frightened of it any more. I have accepted that I will probably have to remain on medication for the rest of the life (or at least until an alternative becomes available). That doesn’t bother me now that I have found something that works well for me without awful side effects. Exercise and a balanced diet are two more weapons I fully intend to add to my arsenal over the coming months.

If you are only half living because of depression, don’t put up with it. If somebody you love is living with depression, let them know you’re always there for them. They may be in too much pain or not have the energy to talk, and you’re never going to be able to “fix” them, but they need you more than you can ever know.

My family and dear close friends have pulled me through the worst of my depression over the years, my amazing big sister has lived my illness with me and can tell by the sound of my voice on the other end of a phone line when “it’s back”.

Huffington Post blogger Eileen O’Connor suggests it’s time we started treating depression like the flu. “The flu can happen to anyone at any time. And no one judges you if you get the flu. It’s perfectly acceptable,” she writes. And, just like the flu, once you start talking about your depression, you’ll find out how many people are going through the same thing.