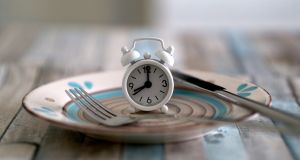 The 16:8 method of intermittent fasting requires limiting all eating (and drinks containing calories) to an eight-hour window each day. Photograph: iStock

I have wanted to get fitter and lose weight for a long time, but I’ve always been cautious not to be caught up in one of those “eat healthier and exercise” scams that are often doing the rounds. When my phone rings from the Solomon Islands, I suspect it’s someone going to tell me that sweets and biscuits and crisps are not the way to go – I should invest my hard-earned money in vegetables and fruit.

I’m also naturally suspicious of all forms of dieting – I’m usually quick to warn people that the strict food and drink regime they’re on sounds rather unhealthy (I have, however, never mentioned good eating or drinking habits to anyone gorging on burgers and chips).

And until 2021, I had never even considered going on a diet. I know nothing about Paleo, Atkins, Dukan or Keto. It might as well be the midfield line-up for the side that recently beat the Republic of Ireland football team.

But that hasn’t stopped me from promising regularly to try something, anything, to lose a few stone. I’ve weighed myself several times over the past few years – a “before weight” as I make plans, yet again, to begin exercise and eat healthier.

Exercise simply doesn’t cut it. Literally. If weight-loss is your goal, exercise alone does not work. At least not for me. During one of the first lockdowns I managed (albeit slowly) to do 50 (5km) runs in 100 days. It made no difference whatsoever to my weight – because, I suspect, you can’t outrun your fork.

Which brought me to the unwelcome conclusion recently, after years of denial, that a food and drink plan may be the only option.

My wholly amateur research convinced me that intermittent fasting is not an unhealthy way to lose weight. I read articles and studies claiming fasting would boost my metabolism, improve my blood sugar, extend my lifespan, make my brain function better (blah, blah, blah) – really, all I was looking for were the words “reduce weight”.

Keep your gob closed after 8pm each evening, and don’t open the fridge or a press in the kitchen until after noon each day. The emphasis is on when you eat, not what you eat. Simple.

Intermittent fasting is one of the more popular health and fitness dieting options – otherwise, I probably wouldn’t have heard of it. And I certainly wouldn’t have even considered trying it. I demand that everyone else jumps first, while I wait and see if it’s successful for a sizeable number of sizeable people.

It is not so much listening to your body, as telling your body to shut up. And there are many versions of intermittent fasting, but the most popular appear to be the 5:2 and 16:8.

The 5:2 involves eating very little, or nothing at all, on two non-consecutive days per week. This holds no attraction for me. Regardless of the fact that it doesn’t sound particularly healthy, I wouldn’t be able to do it anyway. I am blessed to have managed approximately 16,500 days on this Earth without going a single day without food. I had no intention of breaking that streak.

The 16:8 method requires limiting all eating (and drinks containing calories) to an eight-hour window each day. Crucially for me, it’s easy to understand and follow, with no complicated restrictions – just keep your gob closed after 8pm each evening, and don’t open the fridge or a press in the kitchen until after noon each day. The emphasis is on when you eat, not what you eat. Simple.

So, naturally, the first order of business on January 11th of this year – my first day of intermittent fasting – was how I would cheat.

In the first weeks I ate far more during the eight-hour window than I would have normally during that time. I’m not ashamed to say (though I probably should be) that I ran to get a biscuit at 7.58pm on more than one occasion.

But the main cheat was that, for the first five weeks, I didn’t count alcohol as breaking the fast. Which, of course, it was. The start of Lent (February 17th) finally put paid to that serious piece of fraud. From that date until Easter Sunday - 46 days – no calorie was consumed for 16 hours each day.

So what do I have to show for 12 weeks of intermittent fasting (albeit part of it less than fully committed)?

A total loss of six pounds. Less than 3kg. From 15st 10.5lb to 15st 4.5lb in almost three months. Pathetic, considering the effort.

Over the past 12 weeks, I have been eating fewer meals than before and eating less in total – but more importantly and noticeably is what I’ve cut from my diet. Traditionally, I graze after 8pm in the evening – sweets, chocolate, crisps. Nothing but the best.

I’m good at feasting, not fasting.

While the weighing scales has remained stubbornly resistant to change, there has undoubtedly been a boost in general health.

Enough to stick with the regime for now.

I arrived for the weight loss, I have stayed for the health benefits.

Read: How IF may boost our general health