What did 3 million people learn from this online happiness course? 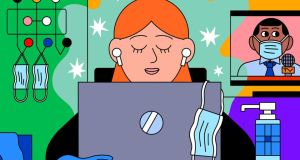 The curriculum asks students to, among other things, track their sleep patterns, keep a gratitude journal, perform random acts of kindness, and take note of whether, over time, these behaviors correlate with a positive change in their general mood. Illustration: Andrea Chronopoulos/The New York Times

The Yale happiness class, formally known as Psyc 157: Psychology and the Good Life, is one of the most popular classes to be offered in the university’s 320-year history. The class was only ever taught in-person once, during the spring 2018 semester, as a 1,200-person lecture course in the largest space on campus.

That March, a free 10-week version made available to the public via Coursera, titled The Science of Well-Being, also became instantly popular, attracting hundreds of thousands of online learners. But when lockdowns began last March, two full years later, the enrollment numbers skyrocketed. To date, over 3.3 million people have signed up, according to the website.

“We octupled the number of people taking the class,” said Laurie Santos, a professor of psychology at Yale and the head of the university’s Silliman College, of its pandemic-era popularity. “Everyone knows what they need to do to protect their physical health: wash your hands, and social distance, and wear a mask,” she added.

“People were struggling with what to do to protect their mental health.”

The Coursera curriculum, adapted from the one Santos taught at Yale, asks students to, among other things, track their sleep patterns, keep a gratitude journal, perform random acts of kindness, and take note of whether, over time, these behaviours correlate with a positive change in their general mood.

Gretchen McIntire (34) a home health aide in Massachusetts, is studying for her bachelor’s degree in psychology through an online program from Southern New Hampshire University. In her free time during lockdown in August, McIntire took the class. She called it “life-changing”.

The practical aspect of the Coursera curriculum appealed to McIntire, who learned she had Asperger’s syndrome at 23. A night owl, she had struggled with sleep and enforcing her own time boundaries. “It’s hard to set those boundaries with yourself sometimes and say, ‘I know this book is really exciting, but it can wait till tomorrow, sleep is more important,’ ” she said.

She said she found having a daily meditation practice helpful and has stuck with it even after finishing the class. Meditation also helped her to get off social media. “I found myself looking inward. It helped me become more introspective,” she said. “Honestly, it was the best thing I ever did.” (She later re-downloaded her social apps, including Facebook Messenger, and felt instantly overwhelmed.)

Tracy Morgan, a programming supervisor at the Bob Snodgrass Recreation Complex in High River in Alberta, Canada, signed up for the class last June as she was in lockdown with her children and husband. “There’s no reason I shouldn’t be happy,” she said. “I have a wonderful marriage. I have two kids. I have a nice job and a nice house. And I just could never find happiness.”

Since taking the course, Morgan (52) has made a commitment to do three things every day: practice yoga for one hour, take a walk outside in nature no matter how cold it may be in Alberta, and write three to five entries in her gratitude journal before bed.

Ewa Szypula (37) a lecturer of French studies at the University of Nottingham in Britain, said she has been interested in self-improvement techniques since studying for her PhD several years ago. “Somewhere along the second or third year, you do feel a bit burned out, and you need strategies for dealing with it,” she said.

One small study from Santos’ curriculum that stuck with her involved polling 632 Americans to predict how happy they would be if they were given $5 to spend on themselves versus getting $5 and being told they must spend it on someone else. In the study, people predicted that they would be happier if they were allowed to keep the money. But participants consistently reported afterward that they had in fact derived more satisfaction from spending money on someone.

Szypula had the opportunity to combine her newfound knowledge in a practical experiment on her sister’s birthday. Instead of keeping an expensive dress she had bought, she gave it to her sister. “I’m still feeling that happiness months later,” she said. Not every student of the class has felt transformed. Matt Nadel, 21, a Yale senior, was among the 1,200 students taking the class on campus in 2018. He said the rigours of Yale were a big adjustment when he started at the university in the fall of 2017.

I should be so grateful for everything that I have. Because you’re not built to notice these things

“I was stressed, and I didn’t know exactly how to manage that,” he said. Nadel said he was disappointed that the class was a sort of review of the kinds of obvious good advice you may get from a grandmother: Get enough sleep, drink enough water, just do your best. “I knew that sleeping was good. I knew that my grades didn’t matter for long-term happiness, that I wasn’t going to be a happier, better person because of having good grades,” he said. “Did the class impact my life in a long term, tangible way? The answer is no.”

While the class wasn’t life-changing for him, Nadel said that he is more expressive now when he feels gratitude. “Which is great,” he said. “But that’s about all.” Kezie Nwachukwu (22) also took the class at Yale. He didn’t think it was revolutionary, either, he said, but has managed to find some lasting value in the curriculum. Nwachukwu, who identifies as a Christian, said that the most important thing he learned is about the importance of faith and community in happiness.

“I think I was struggling to reconcile, and to intellectually interrogate, my religion,” he said. “Also acknowledging that I just really like to hang out with this kind of community that I think made me who I am.” Life-changing? No.

But certainly life-affirming, he said. “The class helped make me more secure and comfortable in my pre-existing religious beliefs,” Nwachukwu said.

Another lesson that stuck with him was the value of negative visualisation. This entails thinking of a good thing in your life (like your gorgeous, reasonably affordable apartment) and then imagining the worst-case scenario (suddenly finding yourself homeless and without a safety net). If gratitude is something that doesn’t come naturally, negative visualisation can help you to get there.

“That’s something that I really keep in mind, especially when I feel like my mind is so trapped in thinking about future hurdles,” Nwachukwu said. “I should be so grateful for everything that I have. Because you’re not built to notice these things.” – New York Times