Umbilical cord banks – a lifeline or an ethical tangle?

A company is encouraging expectant mothers to freeze their babies’ umbilical cords, which are rich in stem cells 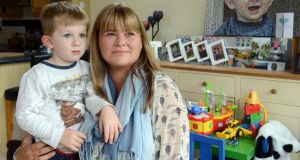 The back pages of The Irish Times reflect our changing lives. But it is not every day you come across an advertisement encouraging you to freeze your biological material.

The Medicare Bio Health company is encouraging expectant mothers to freeze their babies’ umbilical cords, which are rich in stem cells, and store them for 20 years, for use in potential medical emergencies. This was not a service that Michael Doherty of Medicare Bio Health, a provider of maternity medical supplies, had ever planned on providing.

“It was mums coming to us, early in 2002 and 2003. Perhaps they’d heard about it when they were on holiday in America. I can only guess where these stories came out of.”

The first stem cell transplant had been performed 10 years before, by Prof Eliane Gluckman, on a little boy with Fanconi’s anaemia, an inherited syndrome of bone marrow failure.

Alive and well
The child received blood from the umbilical cord of his sister, who was still in their mother’s womb.Today he is alive and well.

“There have been 30,000 cord stem cell transplants. It’s an incredible success story.”

It is also a story with huge ethical implications, not least in the contrasting effects of storing cord stem cells in public and in private banks. Is storing cord blood the action of a responsible parent? Or the health industry profiting from our fear? Or a really worrying sign of bio-medical elitism which can only widen the gap between rich and poor?

In the midst of this controversial discussion, Michael Doherty maintains that “Over 50 per cent of our clients are medical scientists – doctors, biologists and so on. And of the others, 45 per cent come to us very well informed.”

European directive
Michael Doherty and Medicare Bio Health are quietly proud of the fact that theirs was the first (and only) commercial company in Ireland to be granted a licence to procure cord blood, and had to comply with the European directive on the matter.

The Irish bloods collected by Medicare Bio Health are then stored by Future Health Technologies Ltd at its facility near Nottingham, in the UK. “We would have a number of thousand we collected,” says Michael Doherty.

Rates are quite straightforward, and include the years of storage: a one-off payment of €2,450 for a single child and identical twins; €4,410 for non-identical twins.

However, it is not all plain sailing. The argument comes in three parts. Is it ethical to freeze stem cells for the sole use of the child and, perhaps, of his family? Is it worth freezing the stem cells of someone with no known genetic health issues, when the chance of them being used are so small? And can the commercial companies even ensure the stem cells will be usable should the need arise?

Smith points out that only one in four or one in five umbilical cords which are stored in public banks will “live up”, as he puts it, to being frozen.

In the public banks these rejected cords are offered for research. In the private cord banks the rejection rate is, presumably and predictably, much lower.

Cord bank
In Ireland our only public cord bank is located in the Blood Transfusion Service Board (BTSB) on the campus of St James’s Hospital in Dublin.

“We don’t have many cords,” says Smith. “Dozens”. These all come from directed donors – mothers with health issues in their families. The public cannot donate their babies’ umbilical cords to the BTSB bank. But the dozens of cord bloods stored in Ireland are part of an open international system, and give us access to all the cord blood stored across the world.

Smith is far less sanguine about the cord stem cell samples being stored in private facilities. “These things cost a fortune to store. The chances of them being used are so small, 0.5-0.005 per cent, that it can hardly be cost effective, I would suggest.”

In an overview of the collection, storage of and use of the stem cells in umbilical cord blood in Europe (Blood Transfusion, 10, 2012), Prof Carlo Petrini made all these points, and more: “Indeed, the major criticism of private banks is precisely the non-availability to the public of this blood . . . The legitimacy of commercial cord blood banks for autologous use should be questioned as they sell a service which has, presently, no real use regarding therapeutic options.”

Michael Doherty is a reasonable and charming man. “Of course in an ideal world there would be public banks,” he says.

Ethnically diverse
He points out, among other things, that with Ireland’s increasingly ethnically diverse population, we now have children who might find it difficult to find a stem cell match.

For this reason, mixed race couples are some of his customers , he says.

The argument about private versus public cord stem cell storage will only become sharper as the list of diseases stem cells can treat becomes longer, as it is expected to do: Petrini lists heart disease, diabetes, brain and spinal injuries and stroke as possibly amenable to treatment with cord stem cells.

Potential advances
He quotes researchers as saying that these potential advances have caused them to re-examine the wisdom of storing cord blood. In Ireland some couples have already made their decision.

‘I’m glad I used the opportunity. I think I would do it again. It feels like a bit of security’

Helen McConnell has no regrets about storing her baby’s cord blood at the time of his birth, in October 2010. “ I have to say I’m delighted I did it. A friend of mine had a baby recently and I was encouraging her to do it.”

For Helen storing cord blood was an idea that was in the air a good while before delivery.

“I knew someone who did it before, and I knew that my consultant did it. I got most of my information from her.”

Helen’s son, Tom, was delivered at a private hospital and her consultant obstetrician routinely saved cords, which must be retrieved in the third stage of labour. In Britain the Royal College of Obstetricians and Gynaecologists’ and the Royal College of MIdwives have issued joint guidelines against the saving of cords at birth, unless there are definite medical indications to do / so. This policy outlines the difficulty of having yet another health professional at delivery, in order to harvest the cord. And the RCOG/RCM guidelines also raise concerns about the potential interruption to the care of both mother and baby in the final stages of labour.

As it turned out Helen sailed through these objections, firstly by having the cord saved by her obstetrician. And secondly by the fact that she had to have a Caesarean. “So I didn’t even know about it. It wasn’t disruptive in any way.”

After the birth Helen and her husband, Kevin, pack the plastic pouch containing the umbilical cord themselves. “You’re given a care collection kit. You have to seal it and sign to say you’ve sealed it,with the time and date of the birth. Medicare then send a courier to pick it up.”

Neither she nor her husband found this intrusive, she says. They paid “Just over 2,000 euros, that’s a once off payment,” for the procedure and for storage of the cord for 20 years. Her consultant, says Helen, donated her fee for retrieving the cord to charity.

Helen thinks the idea of cord storage may have come to her because “Although there are no genetic diseases in our families a friend of mine got leukaemia at that time, and I knew of other adults with it as well.”

She also thinks that the fact that Tom was what she calls her “first successful baby”, after years of assisted conception and miscarriages, had a lot to do with it. Her husband, she says, was “Very happy to do it as well.”

The RCOG also estimates that the chances of a child subsequently needing the cord blood stored in a commerical facility - in other words, stored purely on the wishes of its parents, and for no medical reason- are as low as .005%. “I didn’t know that,” says Helen. “And hopefully we never use it. But I’m glad I used the opportunity. I think I would do it again. It feels like a bit of security.”

It’s Ash Wednesday, aka National No Smoking Day, tomorrow. Here’s how to kick the habit

My days of eating meat at every meal are over
5