‘The doctor was not paying full attention to me. How could she, the place was bedlam’ 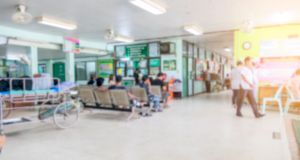 “As I slumped in the wheelchair, dazed, with blood caked on my face, hands and arms, I knew immediately I needed to get out of there as fast as possible.” Photograph: iStock

The bleeding from my nose started three days after surgery. For a year, I’d been struggling with the aftermath of having part of my nose removed and rebuilt following the excision of a non life-threatening but aggressive tumour. This operation was to be the last before I moved home from New York to Ireland.

There was no warning, no advance trickle of blood, but an instantaneous gush of blood pumping from my nose. Standing in my bedroom, still weak from anesthesia and powerful opioids, I did what my basketball coaches trained me to do and pinched hard below the bridge of my nose. The pain of this pressure on my freshly stitched and swollen nose was immense. After 15 minutes, the blood stopped.

The next night, it started again. This time it didn’t stop. 15 minutes turned into 20 (the medically recommended time to seek help), which turned into an hour that turned into two hours. By this point, the blood was flowing so fast it was coming down the back of my nose and out my mouth. It was time to go to a hospital. I was having a medical emergency.

There are many hospitals and emergency rooms in New York. Some are good and some are really, really bad. Our local hospital had a reputation somewhere in between, but I didn’t care. I needed someone to stop the bleeding.

I arrived into the hospital waiting area to an empty reception desk. After a few moments, a woman wandered in and sat down. She was not fazed by the blood gushing from my nose and mouth. Restaurants have taken take-away orders faster than this person took some basic details from me. She banged on a door behind her, summoning, I hoped, a nurse. As she leaned back on her chair, banging on the door, I half expected her to blurt out, “Marge, we’ve got a bleeder!”

Eventually, Marge emerged from her room and beckoned me inside. Tapping on her computer, completely disengaged, she asked: “What’s the problem?”

The large, plastic Mardi Gras cup I was carrying was almost full of blood. I was still hemorrhaging from the face. “My nose is bleeding,” I responded, calmly, going deep into my happy place to cope with what was already a bad start.

I was too weak to walk so a wheelchair was found and I was pushed through a grim scene of the sick, injured and drunk. An American ER and an Irish A&E are similar on first glance. There are beeps, curtains, moaning, groaning and shouting. Nobody wants to be there. Relatives slump in uncomfortable chairs, hassling anyone who walks past in a uniform about seeing a doctor. But there is an air of peril in a New York ER not present in an Irish A&E. Because there are guns everywhere in America, and it is a more violent culture, there’s a particular edge to being in a medical emergency there that I have not felt in Ireland.

As I slumped in the wheelchair, dazed, with blood caked on my face, hands and arms, I knew immediately I needed to get out of there as fast as possible. I could tell instantly that I was not going to get good care. My entire focus sharpened to finding someone who could stop the bleed, wherever in my head it was coming from.

We arrived at the bed I was assigned to. The place was packed to capacity with two or three visitors per patient. There were so many beds the curtains that provide privacy could not be closed. A care assistant flung two hospital gowns on the bed. One for the front, one for the back. I declined to put them on.

Another care assistant arrived with a privacy screen and placed it around the bed. The woman in the bed next to me groaned, and her daughter started yelling, “so she gets a screen because she’s white?” She was right. I hadn’t asked for it, but I was offered privacy when others weren’t.

A man wandered by in a bright, green gown, singing at the top of his voice. He turned to us, lifted his gown, and exposed himself. A woman on the other side of the room started shouting.

Finally, a doctor arrived to determine if I was having an anterior bleed (okay) or a posterior bleed (not okay). Though the doctor was kind, she was not paying full attention to me. How could she, the place was bedlam. The singing man exposing himself was a psych patient. A man in a bed opposite me was groaning loudly in pain. The woman who complained about the privacy screen had reached the threshold of her patience and began screaming at the staff. You could cut the air with a knife.

And in that moment, I was afraid somebody might actually do that.

The doctor wanted to pack my nose – a complicated, nasty business. If she’d looked at my case in the hospital system, she’d have known not to do that. She’d have known to call an ENT. She had all the information at her fingertips, but she was too stretched to do anything about it.

I resisted fiercely. I knew a packed nose could potentially undo several surgeries and do more harm than good. I followed and trusted my gut, a terrifying thing to do when you are losing blood and scared out of your mind.

At 3.30am, the bleeding stopped and I left, barely stopping to sign myself out. I couldn’t bear to be in that room a minute longer. In a country as big as the US, in a city as rich as New York, emergency rooms are still struggling. The American health insurance industry has the medical profession on its knees. Trying their utmost to offer good care, while being nickel and dimed for every square inch of the human bodies they treat.

The end result of this is indignity: for patients, and doctors, and nurses.

The security guard nodded to me as I left the building. It was a quiet moment of acknowledgement between us. I was leaving. He had to stay and stand guard. I wasn’t out of the woods yet, but I was going home.

And I was lucky to do so.