The waiting room: having babies later is no bad thing

Despite a woman’s fertility falling after the age of 36, more than a quarter of all births are to women over 35 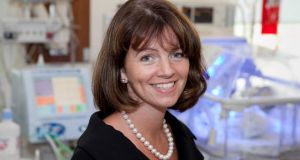 Dr Louise Kenny, professor of obstetrics at University College Cork and a consultant obstetrician and gynaecologist, says she would never try to talk a woman or couple out of trying to conceive just because she is over 40.

With many Irish women choosing to delay starting a family until well into their 30s and even 40s, there has been a lot of focus on the negative side of delaying motherhood. However, the reality is that the majority of these women do conceive naturally and often quite easily, and go on to give birth to perfectly healthy babies.

There is no doubt that the optimal time to have babies is in your 20s when you are at your most fertile and your risk of miscarriage, birth defects and other complications is lowest. However, either by necessity or choice, the number of women having babies in their 20s has fallen significantly over the past number of decades.

Dr Louise Kenny, who is professor of obstetrics at University College Cork and a consultant obstetrician and gynaecologist, says that despite the well-documented risks, she would never try to talk a woman or couple out of trying to conceive just because she is over 40.

“I would often see couples for preconception advice where the mum is in her early 40s and they have two healthy kids. They are thinking about having another baby but feel she is too old. In my experience, if the desire to have a baby is there when you are 40, it does not go away, it just gets stronger. I go through all the issues involved in a very factual way, but I would never talk anybody out of conceiving.”

Kenny had her own children in her 20s, but many of her colleagues and friends are having their babies in their 40s for different reasons; some down to busy careers and others because they did not meet the right partner until they were older. At any one time, she is looking after half a dozen expectant mums in their 40s.

She remarks: “It’s a very personal thing; it’s swings and roundabouts. I had a lot more energy in my 20s and a lot less money. An older mum might have less energy but be more settled careerwise, more financially stable and have a better appreciation of what a gift a baby is.”

“We are born with a certain amount of eggs and they age with us so if, for example, you conceive at the age of 36, that egg has been around for 36 years. As a result of it being older, there is a higher likelihood that the chromosome will not split correctly at fertilisation and it will lead to a chromosomal abnormality such as Down syndrome.”

A woman’s fertility falls reasonably steeply after the age of 36 and declines quite significantly from the age of 40. One in six couples have fertility issues and this rate is higher for older mothers. Women over 40 have a threefold increased risk of the serious pregnancy complication pre-eclampsia, an increased risk of miscarriage and gestational diabetes, and a higher chance of needing a Caesarean section.

However, despite all these increased risks, Kenny points out that many women can and do get pregnant from their late 30s onwards, and enjoy uncomplicated pregnancies.

Women who are trying to conceive at a later age should follow the standard advice to ensure they are in optimal health pre-pregnancy. This includes losing weight if necessary, eating healthily, giving up smoking, cutting out or reducing alcohol, and taking folic acid.

While the evidence of the benefits of giving birth later is “a bit nebulous”, Kenny says older mothers tend to be better educated, have achieved in their careers, may be better able to take care of a baby and may even make better parents.

“Society has changed so much in recent decades and we are living longer. It would have been quite uncommon for women of my own mum’s generation to have a baby in their 40s, but with increases in life expectancy, it is plausible that you could have a child in your 40s and see them graduate and have their own children.”

The decision announced last month by Apple and Facebook to help cover the cost of egg freezing for female employees has generated much debate about the deferring of motherhood.

While the intervention aims to level the playing field for female employees, critics suggest these companies are simply putting even more pressure on women to keep working and put their personal lives on the back burner.

Hands hurting from all the handwashing? Here’s how to show them a little TLC
5