The sandwich years: ‘I would spoon a mouthful of porridge into my baby, then into my mum, then me’

Looking after my newborn daughter and my mother who had suffered a stroke left me feeling I was failing everyone, at a time that they needed me most 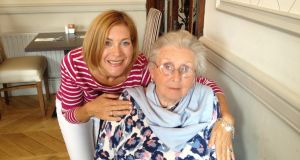 Alana Kirk and her mother: ‘Everyday moments in our relationship are forever now memorised as momentous.’

The term “sandwich generation” was coined to describe people who are “sandwiched” between caring for children and parents. In life, women can have many labels: daughter, single girl, wife, career woman, mother. Alana Kirk had worn them all and while her life was hectic, she felt that she was in charge. Then, four days after the birth of her third daughter Ruby, her mother had a massive stroke and everything changed. She and her mother had always been close. Her mother’s stroke left her paralysed, doubly incontinent and brain damaged, and Kirk was catapulted into a perfect storm of care.

In the following extract from her new book, Daughter, Mother, Me: a memoir of love, loss and dirty dishes, Kirk describes what she calls her sandwich years, when she was both grieving for and caring for her mother, supporting her father, raising three young daughters and trying to get her career back on track.

In her words, “It didn’t take long for the cracks to show and, amid the maelstrom of need, I realised I had lost the label I had started out with: me.”

My mum needed caring for in the same way as my baby. I would drive up the long road to Belfast from Dublin. Sometimes I took the girls with me, unable to be separated from them again. But that had its challenges.

In Belfast, my mum was bed-bound, so I was housebound, and entertaining three little people in a small room for two days was tantamount to being gagged, bound and tortured with hot pokers. So often they stayed in Dublin with their dad. That meant taking the girls to school on a Friday morning, and saying goodbye amid tears and regret. Guilt would always walk home beside me, prodding me with his boney fingers.

I would feed Ruby, pack the car and make the long lonely journey up the motorway, hoping I would get there before she woke up. Often I had to pull over into a busy lay-by to feed her in the front seat. The sleep deprivation and exhaustion from a new baby meant that constantly driving up and down the motorway was often dangerous. The weather in winter made it treacherous.

Over those first awful months, Ireland experienced one of its worst snow and ice periods, with the coldest November on record. I drove through so many sleet storms it felt like driving through a grey and white tunnel for 2½ hours. I couldn’t even play music in case it disturbed my baby. I would often arrive with my hands frozen in a focused fist around the steering wheel.

This drive though, gave me time to be alone with my thoughts. Often, by the time I rounded the last corner before my mum’s house I would have to pull over, wipe away my tear-smudged make-up, and rearrange my face before I drove into their driveway and hooted my horn, saying hello. Those weekends were a torrent of pain and grief. I cried all the way up that motorway at leaving my girls, and I cried all the way down that motorway at leaving my mum.

I constantly memorised every last situation with my mum – her last kiss to me as she said goodbye; our last phone call just three hours before her stroke, how happy she’d been; our last hug; our last fight. Everyday moments in our relationship, forever now memorised as momentous.

And, alongside that, all my new firsts with Ruby. Her first smile, like a rainbow after a storm. Her first giggle, a trickle that gushed into a flood. Her first spoonful of solid food – her surprise, my delight, her excitement, my satisfaction.

And for that first year, the parallels of caring for a baby and a parent could not have been more pronounced. I would wake up in my parents’ house, Ruby asleep in the carrycot beside me. I would gaze into her sleepy little eyes and stroke her face, thrilled with her recognition.

Then I would pass my mum’s old bedroom that she would never see again, and go downstairs. I would gaze into her sleepy old eyes and stroke her face, thrilled with any recognition.

I would lay Ruby out on the changing mat, and lift out a nappy to change her bum, always keeping eye contact. Then I would lay out my mum’s nappy. (They call them pads to protect everyone’s dignity, but they are nonetheless nappies. Big oversized, adult nappies.)

To see the glamorous, life-loving woman you grew up with, reduced to wearing a nappy, and knowing she is aware of it, is a feeling that I can’t describe. Then, with Ruby changed, I would either wait for the carers to come and change mum, or try to wipe up the mess that had come out during the night, deliberately avoiding eye contact. Then I would make breakfast.

I would rub cream on Ruby’s chubby little kicking legs, and massage cream into mum’s thinning, useless legs. I would give mum a cup of cooled tea in a plastic sippy cup with a spout and handles, and give milk to Ruby in a similar one.

The brutality of it haunts me still.

The awe I felt for Ruby was matched by the shock of my mum’s sudden demise – two ends of my emotional spectrum, my mum and my baby – and the powerlessness of the situation overwhelmed me.

My other two girls needed me too. They had entered the most special times of their lives to date, leaving the security of the world I had created for them at home, to start exploring the world I had gently pushed them towards at school and playschool, and they needed me to be there.

But often I couldn’t be there because I was with mum. And then, when I was home with them catching up with our precious time, I would hear the strain of my dad’s voice when something distressing had happened and I knew I should be there with him.

In those early days of settling into a new life with my mum in bed and my dad as a carer, every little new step – every explosive bowel movement, every vomit, every little thing – was a huge thing. It was all new, and none of us knew what to do. I was constantly pulled between my children, my parents and my husband.

In those first few months, whichever way I turned, somebody needed me, and I couldn’t be everywhere. It felt as though I was failing everyone, at a time that they needed me most. Daughter, Mother, Me: a memoir of love, loss and dirty dishes is published by Hachette Books Ireland. €13.99