How does testing and tracing work? Irish Times readers share their experiences 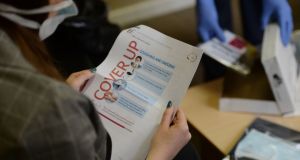 Fiona O’Brien: My son was due back at school. Then he got a cough

My 10-year-old son had a mild cough the day he was supposed to return to school. We kept the other children off too. We rang the GP’s office for advice at 8.30 am; she called back two hours later. I got a text from the HSE at 12pm for an appointment that day at 2.30 pm. The test was over quickly and he said it was grand. The tester told him to tell everyone how easy the test was. We got a negative result at 8.05pm the following day. All in all, we found the service excellent.

Rory McCarthy: Being referred for the test and scheduling it took 26 hours

Karen O’Hara: I had to postpone my C section after I tested positive

I was almost 37 weeks pregnant. I felt unwell on a Monday, called my husband, he came home straight away, and we both made the call to get tested.

My test was carried out in the Rotunda the next day. My husband was working in Beaumont; he got tested there. We both got the results within 24 hours – both positive. Neither of us had a temperature.

I had to postpone my C section by a few days to work through the two weeks’ self-isolation. My husband was allowed in to the hospital for the 30 mins of the section, then he had to leave. He didn’t get to the wards with me and our new baby. We briefly kissed goodbye at the lift, as they wheeled me passed.

We could only keep in touch over WhatsApp for the three days I was on morphine and recovering. We both cried a bit when he picked me and our new little man up from the hospital. Our neighbours stood at the end of our driveway and clapped when we arrived home. There wasn’t a day that went by for weeks when someone didn’t leave a package of treats or meals at our door.

Siobhán Clarke: The hardest part was getting the GP to refer for testing

On Monday August 24th, I developed cold and flu symptoms. I rang my doctor at 8am on Tuesday, but could not get a phone appointment until Thursday. So I used my health insurance GP online account, and got a video call with a GP. At 5pm on the Tuesday I got a text with an appointment time ; the appointment at 4pm Wednesday, and a negative result on Thursday at 10pm. So the hardest part was getting the GP to refer me for testing.

Edward Williams: I’m trying to do the right thing, but the system is making it hard

I wanted to get tested because I was feeling a little unwell and I want to visit my parents in the UK soon. My doctor encouraged me to get the test to be safe and protect my parents.

I received an appointment on Monday evening at the National Test Centre in Swords. I don’t have a car, and this was too far for me to cycle when I was feeling under the weather, so I logged in to the system to change the appointment. But I was only able to change the time and not location – if I wanted another location I had to cancel and go back in the queue. I cancelled and added a note about the location request.

After almost a week of calling the HSE helpline, emailing the HSE, and calling my doctor again, I got another text message with an invite for a test. Once again, it was out by the airport Friday morning. Now I am resigned to cycling out to the airport. The system is so opaque and frustrating with no way to speak to anyone who has any responsibility or power over the actual booking process. I’m trying to do the right thing, but the process is making everything very difficult.

My daughter is selfish and insufferable
8