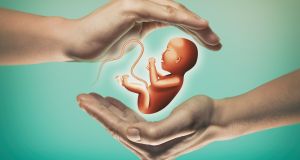 Would it be acceptable if healthy women dealing with, say, body image concerns or employers who don’t want them to be off work, chose AWT as a substitute for a normal pregnancy? Photograph: iStock

In Aldous Huxley’s Brave New World (1932), something odd is going on at the Central London Hatchery and Conditioning Centre. The process is ectogenesis – the development of embryos in artificial environments – entailing the growth of individuals on flaps of fresh sow’s peritoneum in bottles on a conveyor belt “travelling at the rate of thirty-three and a third centimetres an hour”.

As it turned out, it wasn’t such a long way because artificial womb technology (AWT) is here . . . well, almost. On April 25th, 2017, researchers at the Children’s Hospital of Philadelphia described in journal Nature Communications “an extra-uterine system to physiologically support the extreme premature lamb”. Essentially, they had removed lamb embryos from the mother and incubated them in a plastic “biobag” – literally, a womb with a view – supplied with blood and other nutrients to show that “foetal lambs that are developmentally equivalent to the extreme premature human infant can be physiologically supported in this extra-uterine device for up to four weeks”.

The lambs survived and were “delivered”, with the researchers stating that their system “offers an intriguing experimental model for addressing fundamental questions regarding the role of the mother and placenta in foetal development”. Although acknowledging that “clinical application of the technology will require further scientific and safety validation . . . ” the researchers are clear: “The initial clinical target population for this therapy will likely be the 23-25-week extreme premature infant.”

AWT as an extension of neonatal intensive care – removing an endangered, premature foetus from its mother to an artificial and well-controlled environment – is morally justified.

But AWT could raise a few bumps farther out on the ethical landscape. Uterine transplantation (UTx) and its ethical concerns is a fact of reproductive life, with the Lancet (2015) reporting the first live birth following UTx on October 5th, 2014. Might AWT further challenge the apparently inviolable bond between mother and baby?

Women with intractable uterine problems may consider AWT as one way of obviating the need for UTx or surrogacy. But would it be acceptable if healthy women dealing with, say, body image concerns or employers who don’t want them to be off work, chose AWT as a substitute for a normal pregnancy?

Prof Megan-Jane Johnstone of Australia’s Deakin University noted that AWT could adversely affect women’s reproductive rights and health. For example, in a coercive society, those women considered “unfit” by state authorities to continue with a pregnancy might receive a “coercive treatment order”, and their embryos transferred to AWT until they are viable. But would a viable embryo, duly delivered, be returned to an “unfit” mother?

How might AWT impact the abortion debate in the future? A woman might assert her reproductive autonomy by terminating her pregnancy, but rather than termination resulting in the death of the foetus, transferring it to an AWT environment would ensure its survival. Would this be acceptable to everyone?

Also looming on the AWT ethical horizon, albeit in the far distance, is the gender debate and the role of reproductive rights for those who have undergone sex reassignment surgery from, say, male to female. Perhaps a transgender individual may wish to assert what they consider to be their right to have a biological child. It seems a distinct possibility – given the current panoply of technological advances including synthetic gametes, UTx and AWT – that such procedures might be scientifically feasible within the next decade.

It seems possible that the intimate and unique bond between what has previously been accepted as a female and a child that develops within its mother’s womb might be challenged by those questioning so-called traditional assumptions about gender identity and the biological roles of both male and female bodies in relation to conception and birth.

In her The Whole Woman (1999), Germaine Greer had surrogacy in mind when she wrote: “if preparing a womb to harbour the progeny of strangers is morally acceptable to us, we must have to some extent accepted the idea of the womb’s being an impersonal container”.

The advent of AWT may further reinforce the notion of the womb as “an impersonal container”, yet there is no denying its possible future role in neonatal intensive care.

On the other hand, given the speed of current scientific and technological progress, the ethical framework from which we view technological development is in constant need of recalibration. In this respect, we all have a role to play in shaping the debate over AWT before we are overtaken by events.

Sean Moncrieff: ‘I often want to applaud gorgeous women. But that would be creepy’
9