The art of medical observation 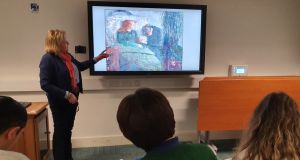 It is a Monday afternoon in a Trinity College seminar room and 12 first-year college medical students are being shown an image of a famous Vermeer painting called Mistress and Maid from the Frick Collection in New York. Instructed by their lecturer, Dr Brenda Moore McCann, they are told to look at it very carefully and describe what they see, what they are looking at.

Now what, you may wonder, has art to do with medical training?

She poses questions to them. Are the women in the painting speaking to one another? What can you deduce from their clothing? What does the gesture of the woman with the letter mean? Does she look anxious? What could she be anxious about?

The face, Moore McCann carefully points out, isn’t the only place where you discover emotion – anger, rage, fury, fear – it is also evident in the body, in the gesture.

“I make them work out the narrative, the clues given by the artist, the things going on inside as well as outside the painting. Where light falls can give information on the room, for example.”

After the students respond, she then explains the 17th century background. Men were away fighting or at sea, so the letter could be bringing bad news.

Another painting follows; it is Jacques Louis David’s politically charged The Death of Marat, a key figure in the French Revolution. Again, the students are asked to describe what they see. Is he dead or dying? Why is he wearing a turban? What was he writing? And, on another day, a famous painting by Edvard Munch of a young girl consoling the woman beside her is analysed in a similar fashion.

“This is about intense observation,” explains Moore McCann who is not only a medical doctor but an art historian.

“My aim is to get them to understand the complete process of seeing – the stare, the glance, the gaze. Eye contact is extremely important, but all of the senses have to be used. The art is a tool. At this early stage in their development as doctors without medical knowledge, they are going to have to rely on the same tools in terms of how they perceive and make judgments of patients. It is the same at this point whether you are an artist or a medical student. You have to be accurate in how you describe symptoms, signs,” she explains.

Like dissecting a cadaver, they are now dissecting a painting and learning about intense observation in the process

Symptoms and signs are different but used interchangeably. Symptoms are what patients describe; signs are what you elicit from patients, and these are important distinctions, she stresses. Like dissecting a cadaver which the students do in their first year, they are now dissecting a painting and learning about intense observation in the process.

Later in the afternoon, they have a more challenging experience at the Douglas Hyde Gallery where Gabriel Kuri’s ambitious Spending Static to Save Gas installation changes the space and energy of the gallery, and The Artist’s Eye by Kirsten Pieroth explores the human condition; they generate a lot of bewilderment and questions.

The six-week course held every Monday afternoon is part of a series of humanities modules introduced to the first-year medical school curriculum by Prof Shaun R McCann, then professor of academic medicine in 2008. In tandem with many medical schools in the US and the UK since the 1990s, it was a response to the increasing dominance of technology in medicine, the fact that younger doctors were becoming disconnected from their patients with a consequent loss of trust. In the drive for more efficiency and growth of patient population, the time-honoured doctor-patient relationship was being affected adversely.

Students can choose from 13 different modules, compulsory since 2010. Others include literature, advocacy, arts and health, medicine and power.

According to Moore McCann: “Modern medical training is based on the scientific method . . . the humanities provide a broader, less rigid model that allows for ambiguity, uncertainty and lack of resolution . . . qualities suited to the practice of medicine which is an art that uses scientific methods.”

Moore McCann, who devised and directed the perception in art and medicine module and has been conducting it since 2008, believes that at the early stages of medical training, the same perceptual tools are used for medicine as for art.

The aim is to create a better understanding of the complexities involved in the act of seeing. X-rays, for example, are used both in art and in medicine.

If you are trained to look for something, you probably see more than someone who has not been trained

“If you want to torture somebody, you bombard their senses. We are bombarded by sounds in restaurants, in shops, in supermarkets. We live in a very visual culture and so your brain filters it, so you just look at certain things.

“If you are trained to look for something, you probably see more than someone who has not been trained. Even hands can be revealing. I can’t stop myself from diagnosing even on the street. It is something that stays with you forever. What does that person look like? Why is that guy in a wheelchair?”

Students’ reactions to the module have been enthusiastic. “It was very interesting learning how to frame from the context certain information that changes one’s perception. I had no art appreciation before and it was interesting to learn how to dissect a painting if you see the painting as a patient and how to go about making a deduction about that,” said Aman Malhotra, a view echoed by Katherine Dinan: “It really teaches you how to observe. We don’t just look at a patient’s symptoms but at the person,” she said.

May Harley felt the course integrated art and medicine very well. “The difference between the internal and the external and how they relate to each other and the body from a physical point of view was very interesting.”

There was great appreciation, in particular, of the life model drawing class.

Prof Shaun McCann, now retired and author of a recent history of haematology among other works, addressed the students on their last day, outlining some aspects of his distinguished career. That included setting up the first bone marrow transplant service in Ireland, dealing with the Hepatitis C scandal in the 90s and his Open Windows Project using art to help recovering transplant patients at St James’s.

He also drew attention to the WHO 2019 report showing that the use of the arts within health can help the understanding of illness and disease and improve clinical skills. He quoted Sir William Osler, the greatest and most admired physician in the history of medicine: “The good doctor heals the disease. The great doctor heals the patient with the disease.”