The ‘disease’ on track to become a bigger killer than cancer

The explosion of superbugs already claims 33,000 lives in the EU every year 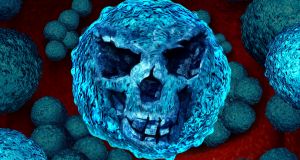 Superbugs: there is a need for guidelines on antibiotic prescribing to be simplified so that they can be applied more easily in everyday practice. Photograph: iStock

Imagine I told you of a new disease that was on track to become a bigger killer than cancer by 2050. You would be alarmed, I imagine, and want to know if a cure was on the horizon. Well this “disease” is actually man-made and there is no new treatment waiting in the wings to save us.

The “disease” is anti-microbial resistance (AMR), which has led to an explosion of superbugs that already claims 33,000 lives in the EU every year. And, according to the latest report, the rise in antibiotic resistance continues.

Data just released by the European Centre for Disease Prevention and Control (ECDC) and the European Food Safety Authority (EFSA) reveal that drugs used to treat diseases that can be transmitted between animals and humans, such as campylobacteriosis and salmonellosis, are becoming less effective. The joint report examined 2017 data on antibiotic resistance in humans, pigs and calves from 28 EU member states.

Why were animals included?

Antibiotics are used by livestock farmers to treat animal diseases that can be transmitted to humans.

These infections can be acquired directly from animals, through environmental exposure or through the consumption of contaminated foodstuffs. According to the World Health Organisation (WHO), more antimicrobial medication is used on farm animals than on humans. In Germany, for example, doctors prescribed 800 tonnes of anti-microbial medicines in 2011, while veterinarians prescribed 1,734 tonnes. And, in some countries, including Ireland, antibiotics for animals can be purchased over the counter for direct use by farmers.

Both human and animal misuse of antibiotics create superbugs, that are resistant to medication, leading to incurable infections that spread easily. Over the past 30 years, no major new types of antibiotics have been developed, therefore antibiotic stewardship programmes, dedicated to improving antibiotic use, have been established to conserve our diminishing antibiotic resource.

As prescribers of antibiotics, doctors have a key role in limiting their misuse. Strategies to improve antibiotic stewardship feature prominently in post-graduate medical education. Some inappropriate prescribing takes place in primary care, when antibiotics are used in cases of upper respiratory infection caused by a virus and not bacteria. And previous research has shown that one of the main reasons for this is the degree to which doctors think that the patient expects an antibiotic for their acute upper respiratory illness.

A recent Irish study published in BMC Family Practice confirms this pressure persists to some degree, especially when patients are seen out-of-hours.

An in-depth qualitative study of GPs by researchers at the University of Limerick Graduate Medical School shows doctors felt patients often had high expectations of receiving an antibiotic. GPs felt this high level of expectation was borne out of a pattern of behaviour, which developed when patients received antibiotics for respiratory tract infection in the past. Dr Ray O Connor and his colleagues say their research points to the need for guidelines on antibiotic prescribing to be simplified so that they can be applied more easily in everyday practice.

In a separate study, the researchers asked patients attending the ShannonDoc out-of-hours GP service in Limerick about their expectations. Some 435 patients with symptoms of an upper respiratory infection (cough and sore throat) were asked what they were hoping for when they got to see the doctor. Interestingly, just one-third said they had come expecting an antibiotic; the most common expectations were for further examination (53 per cent), reassurance (51 per cent), information (49 per cent ) and medication for cough (47 per cent).

Commenting on their findings, published in the journal BMJ Open, the authors said they were “reassuring for the doctors attending such patients in the out-of-hours setting who feel that an antibiotic prescription is not necessary”.

In the short term at least, AMR is going to get worse. Persevering with a multi-pronged approach offers the best chance of avoiding a 2050 Armageddon.