Tattoos and dangers: myth or reality? 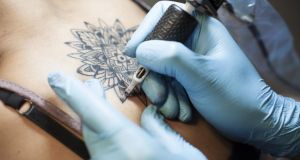 In her 1983 introduction to an unpublished book of photographs of body art by Barry Kay, Germaine Greer described tattooing and piercing as displacement activities, but speculated that they may “. . . evolve into legitimate art forms involving a strong and healthy body decorated with skill, sophistication and meaning”.

This evolution has occurred and the Dublin International Tattoo Convention (August 12th-14th) will host many illustrated men and women “decorated with skill, sophistication and meaning”, confirming that contemporary body art extends beyond anchors on the forearms of tugboat captains.

Today’s tattoos are popular accessories, from Groucho Marx sprinting up an air hostess’s back, to a stockbroker’s deltoid celebrating an ancient Scythian chief.

Although there is no published data on the prevalence of tattoos among the Irish population, a recent review in the medical journal Lancet states that up to 36 per cent of people younger than 40 years have at least one tattoo, with many being first inked between the ages of 16 and 20 years.

“Therefore, there is a risk of localised skin infections, chronic inflammation and the formation of unsightly keloid scars. Although rare, bloodborne diseases have been reported, including HIV, hepatitis B and hepatitis C.

“In our plastic surgery unit, we have actually seen an aggressive melanoma occurring in the red ink of a large tattoo. Furthermore, it has been reported in the medical literature that the metal in tattoos can cause localised burning and swelling in patients undergoing magnetic resonance imaging scans,” he says.

The Lancet article, published in January, explains that about 1mg of ink is injected per square cm of tattoo.

Clearly, tattoo ink should be non-toxic and sterile before opening, but this is not always so. For example, in a 2013 study published in the Journal of the European Academy of Dermatology and Venereology, Danish researchers bought 58 bottles of tattoo ink over the internet from manufacturers in the UK, Germany and the United States.

“The tattoo studio should be fit for purpose, with a sterile procedure area and the tattooing performed under aseptic conditions by an experienced tattoo artist. Regulation of the industry would facilitate the introduction of basic safety standards and this would most likely reduce the potential health risks in getting a tattoo.”

“I had little success up to December 2014, when I received an email from the National Standards Authority of Ireland (NSAI), informing me that new European standards on hygiene in tattooing (CEN TG435) were being developed, and asking for my participation,” she tells Health+Family.

“Since then we’ve formed a national mirror group of stakeholders, including representatives of NSAI, the Health Service Executive, HIV Ireland and ABMAI.”

ABMAI belongs to the European Society of Tattoo and Pigment Research (ESTPR), one of whose members attends meetings of CEN TG 435 as an observer.

“The European Commission launched an 18-month project, completed in March 2016, which aims to collect data about the use, the ingredients, the EU market and the possible health problems associated to tattoo and permanent make-up inks,” says Murray.

“There are many sub-standard and counterfeit products on the market, and research into tattoo ink manufacture and ingredients should be accelerated and regulation brought into effect across the EU.”

Murray also believes that Ireland should move quickly to implement the recommendations of the resolution of the EU Council of Ministers in 2008, which includes a list of substances that should not be present in tattoo inks.

“But the resolution is not binding and has not been referenced in our national legislation,” she says.

And what of national legislation? In November 2015 the Government issued its tattooing and body piercing infection control guidance. A spokesman for the Department of Health says it is currently finalising these draft guidelines.

“The purpose of the document is to provide guidance to the industry in the absence of sector-specific regulation. It is intended to publish the guidelines later this year. There is no plan to introduce regulation or legislation in this area at this present time. This document sets out best practice in infection control for the tattooing and body piercing industry and is aimed at achieving the highest standards of infection control and prevention in this sector.”

Although welcoming the guidelines, Murray says “the ABMAI believe that some basic regulation aimed specifically at the body modification industry is needed, such as registration, licensed premises, basic training of artists, etc.”

For thousands of years we humans have wrought changes on our bodies and courted the concomitant risks. The popularity of tattooing demands action on these risks, so while it is reassuring that industry representatives take the issue seriously, it is disappointing that the Government has no plans for regulation or legislation.