Taking to the hills for the challenge of the sportive 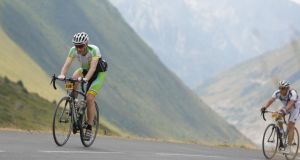 You know those security questions linked to internet passwords. They include queries such as “what was your first school?” Or “what was the name of your first pet?” Strangely, they never include another question: “what was your first bike?” Because although you might have to think a little, the chances are you remember it clearly and fondly, including the circumstances in which you got it – Christmas, birthday or whatever. Unless, of course, it was a Triumph 20 (and if so, sorry for reminding you).

For those of us of a certain generation, that first bike was a milestone – in a time before the internet and mobile phones, it was a sort of coming of age that brought with it new freedom.

For some, it was a short-term thing. But for others a seed was sown and, though the bike may have been replaced by a car as the years passed, somehow that seed remained. All it needed was the opportunity to spring into life.

In my case, the bug bit deeper than most. I raced bikes for most of my teens before life and other distractions intervened. My first bike – a Raleigh – was eventually replaced by a Falcon and then by an Italian-made Colnago.

Unfortunately, I subsequently sold the Colnago but I still have the Falcon – now 37 years’ old with Campagnolo equipment, a ‘Bernard Hinault Turbo’ saddle and, most remarkably, the original Mavic wheels.

By the time I returned to cycling more than 15 years ago in response to an ever expanding waistline, the scene had changed utterly. The biggest transformation was the advent of the sportive – a new type of semi-competitive cycling which, although providing a challenge, is less testing than the ‘eyeballs out’ demands of racing.

A sportive requires you to cover a prescribed route. The challenge is a combination of distance, terrain (generally hilly) and time.

Such events have brought a new cohort to the sport: some coming back to the bike after years off, newcomers discovering cycling for the first time, tri-athletes plumping for cycling over running or swimming and runners finding a bike is easier on their joints. There are all shapes, sizes and abilities but the common bond is a love of the bike and the freedom that comes with it.

I have done it at least eight times and it never gets easier; hopefully, you just ride it faster.

Where once the “Wicklow” stood supreme, that’s no longer quite so clear cut though it retains its status as the must-do domestic event. So extensive is Cycling Ireland’s sportive calendar that from April to September, it is possible to participate in events every weekend.

Everyone has their own favourites but when it comes to tests of pure fitness, the Mount Leinster Challenge (1,700m of climbing), promoted by Slaney Cycling Club in Enniscorthy, and the Orwell Randonnee (2,500m of climbing) and promoted by my own club – Orwell Wheelers – are high on my list. A key selling point of both events is excellent food stops. And rest assured: you’ll have the appetite to appreciate what’s on offer.

Cycling club membership has mushroomed in recent years and, without doubt, it enhances the experience. The hundreds (in fact, thousands) of base kilometres that are needed to build fitness are best done in the company of others.

For newcomers to the sport, a club also provides guidance on training, cycling etiquette and how to ride safely in a group. The latter is most important for anyone contemplating their first sportive – errors on a bike can have serious consequences for you and those around you. And you don’t need the most expensive bike to take part – though once you’re hooked, you can expect to get caught up in a world of tweaking and refining. For most of us, performance is governed by preparation.

Probably the most famous international sportive is the Étape du Tour, which enables cyclists to ride a stage of each year’s Tour de France. About 15,000 participants from all over the world take the challenge.

The route varies because it follows the exact path of a stage of each year’s tour, almost always in the Alps or the Pyrenees. And just to make it interesting, if you’re not making sufficiently swift progress, you are eliminated by the so-called ‘broom wagon’ which travels behind.

Another big Alps-based challenge is the Marmotte (named after a small animal that lives in the mountains), which is staged every July and involves 5,000m of uphill over 175km; it takes in some of the Tour de France’s most famous climbs, including Alpe d’Huez and its 21 hairpin bends.

For the really committed, the Étape and Marmotte occasionally take place on successive days and some have managed the double with little more than a few hours sleep in between.

A very different test is presented by another set of sportives – those based on the “Monuments” of cycling, the most famous one-day races in professional cycling. These sportives tend to be staged shortly before the pro race, which means you can ride the course one day and watch the pros take on the same challenge the next day.

Arguably the toughest of these is Liege Bastogne Liege – also known as La Doyenne – 279km long with 4,200m of climbing and hills much steeper than anything I’ve encountered in either the Étape or the Marmotte. The route, through the Ardennes in Belgium, combines an odd mix of cycling and military history: memorials to second World War battles are juxtaposed with a sculptured monument to Eddy Merckx, the Belgian cyclist who won the race five times. There have been two Irish winners – Sean Kelly (twice) and Dan Martin.

Such events may be beyond the ambitions of many sportive riders. But whatever challenge you choose, there is one constant – whether the route is at home or abroad.

Alloy or carbon fibre may have replaced the steel machine that arrived at Christmas all those years ago but the relationship is the same. It’s about you, your bike and the open road.

Coronavirus: What day of the week is it again?
Real news has value SUBSCRIBE