Each year 270 women die from ovarian cancer. It is vital to listen to your body 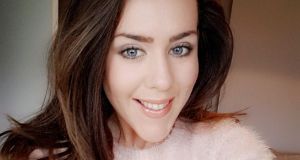 Marian Duggan was diagnosed with a rare form of ovarian cancer at the age of 26 but only after several months of GP visits and scans.

When Marian Duggan began to experience a string of symptoms in her early 20s, she initially put the exhaustion, anxiety, frequent urination and stomach pains down to a kidney infection or just the result of a busy lifestyle.

But after several months of GP visits and scans, the Tipperary woman was horrified to discover that she had a rare form of ovarian cancer.

“My symptoms were a mix and blurred the lines into other possible conditions which is why ovarian cancer is hard to diagnose and catch,” says the now 31 year old. “When I was 23, I started to pay heed to the symptoms which had been persistent for quite some time – I felt incredibly tired; going straight to bed after work and my sleep was disturbed as I think my body knew something was wrong. I was worried as I truly felt something was amiss.

“And I dreaded car journeys as would I often have to stop to use the toilet and actually thought I had a kidney infection. I also had stomach pains which were put down to IBS at the time – and my menstrual cycle was irregular also. My hormones were off-balance as my acne was flaring severely and I had a constant twinge on my left pelvic side while my tummy felt full and bloated and like a weight was pulling it down.”

Marian, who works as a primary school teacher, never once thought her symptoms could be cancer-related and because of her young age, neither did her doctor. “Polycystic ovaries, IBS, bladder problems, food allergies and anything but cancer was looked into,” she says. “I had to persist to get a scan because on the basis of my doctor’s referral the hospital only viewed my case as low-priority. Deep down I was quite worried, but I kept reassuring myself that I would be grand as I had done all I could have done.

“But each symptom was being viewed individually rather than collectively. I eventually got called six months later [mid-July 2014] for my ultrasound and then had the follow-up consultation with the gynaecologist.

“He informed me that the ultrasound showed what they thought to be a cyst the size of a tennis ball. He did a mini scan to show me the diameters of what looked to be a cyst, measuring 10 by 8 by 10cm in diameter. He then arranged for me to have it removed two weeks later via laparoscopy. I wasn’t fully at ease when I left that day but boxed it off and told myself it would be fine.”

Marian also had bloods taken for testing and was in hospital for four nights after the laparoscopy. A couple of weeks later, she received the results and discovered, to her horror, that she had ovarian cancer. “The consultant explained that the biopsy showed that the cyst was a rare form of ovarian cancer; a tumour that actually was hiding out and growing away inside my left ovary,” she recalls.

“It was stage 1 as it was encapsulated and contained within the ovary so he explained that there was an almost certain chance it had not spread. And I tried my best to keep this in mind. It was a grade two to three, which meant that while it was there [contained] it was also fast-growing. So I was immediately referred to Cork to the most wonderful, professional and empathetic gynaecological oncologist – and numerous scans and checks followed to ensure it had not spread.

“The second surgery removed my left ovary and fallopian tube. This went very well and thankfully I didn’t need any further treatment as the cancer had just been contained within that ovary. And further biopsies proved the previously affected region and local areas were clear from any traces of cancer cells.”

Five years on from her diagnosis, the Tipperary woman is cancer-free and says she feels so lucky that the disease was caught in time. “I feel blessed that I listened [to my body] and persisted [with checks] and I went to my GP even though some of the symptoms are not that easy to discuss,” she says. “I’m also blessed that I got it when I did. Early detection is key and I cannot stress that enough. I’d love to help raise awareness as I was only 26 when diagnosed. I did find it hard to talk about it but time has passed and I have been so incredibly lucky that my check-ups have been going well and I think it’s time for me to speak out and help others with early detection.

“Life is precious and fleeting. I am nearly five years in remission now and can’t express enough gratitude for the fact that I am on the other side. I am proud of myself and my journey but the endless support and love I received from my family and friends got me through it and I will never ever forget that.

“I would advise women young and old need to listen to their bodies and persist in seeking medical advice no matter how small their concerns are. Taking responsibility for your health is imperative; the ball is in your court. Please listen to your body – if I didn’t keep returning to my doctor, my story may have been very different.”

– There are approximately 410 cases of ovarian cancer and 270 deaths as a result of the disease each year in Ireland.

– The cause is unknown but there are some risk factors. These include:
1. Ovarian cancer is more common in women who have not had children.
2. Older women who have gone through menopause are more at risk.
3. Between 5 and 15 per cent of cases are caused by an inherited faulty gene. Inherited genes that increase the risk of ovarian cancer include faulty versions of BRCA1 and BRCA2.
4. There is a slightly higher risk if you have received hormone replacement therapy (HRT) and received drugs to stimulate the ovary during infertility treatments. Some research suggests that being infertile may be a slight risk but research is ongoing to know for certain.

Symptoms can include:
– Bloated feeling
– Persistent swollen abdomen
– Pain or dragging sensation in your lower abdomen or side
– Vague indigestion or nausea
– Poor appetite and feeling full quickly
– Changes in your bowel or bladder habits; for example, constipation or needing to urinate urgently
– Abnormal vaginal discharge or bleeding (rare).

Tara Lynne O’Neill: 'I knew Derry Girls was something special'
3

Church wedding not your style? Here's how to say 'I do' a little differently
4

A new way to make fishcakes that is quick, easy and delicious
5