During the Rising, 15 ambulances were provided as were female nurses and men to staff the hospitals 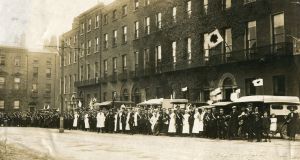 The first emergency auxilliary hospital was set up by Dr Ella Webb at 40 Merrion Square. 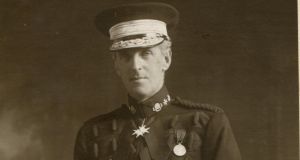 The St John Ambulance Brigade was founded by Dr John Lumsden, chief medical officer of the Guinness Brewery in 1903. Lumsden identified the need to have trained first aiders on site to deal with work-related incidents. Lord Iveagh, the grandson of Arthur Guinness, was chief executive of the brewery at the time, and he worked closely with Lumsden and supported his ideas.

The membership leading up to 1916 swelled, with 1,182 men and 1,592 women in the ranks of the organisation. The organisation spread across 20 counties of Ireland with the majority of members, about 1,300, in Dublin. Many of the divisions invested in motorised ambulances, replacing some of the horse-drawn wagons. Lumsden was fondly respected by the St John Ambulance headquarters in London and he was appointed deputy commissioner in November 1914. The same year it was agreed that Ireland should have its own district due to its rapid expansion.

Over the past two to three years I have been researching the role of St John Ambulance during revolutionary years. At St John Ambulance headquarters on Upper Lesson Street, I found chest trunks full of records, some that had never been opened. During the Easter Rising 600 members of St John Ambulance – of which close to 500 have now been named – turned out onto the streets. They provided 15 motorised ambulances with assistance from the Irish Automobile Club (now RIAC), horse-drawn ambulances, female nurses and men to staff the hospitals and stretchers-bearers to pick up the wounded and dying.

There are many witness accounts that recall members treating both rebels and British soldiers. Some members took a career in the British army while others joined the Irish Volunteers.

John J Doyle joined the Irish Volunteers and when Comdt Thomas MacDonagh found out he was an instructor in St John Ambulance, he appointed Doyle as captain of medical services for the 2nd Battalion. Later he was appointed director of medical services by Comdt Gen James Connolly. He carried out courses in first aid both to the Irish Volunteers and Cumann na mBan. During Easter Week, he operated on Connolly’s wounds with assistance from a student doctor, Jim Ryan, and an army doctor who was taken prisoner.

There was no official ambulance service in Dublin except for the corporation ambulance (Dublin Fire Brigade) which then was a small organisation with only three ambulances in use. These three ambulances were in constant use throughout the Rising. St John Ambulance worked with the authorities in Dublin and provided medical supplies and food to the hospitals. According to one officer, “we saved them from famine”. St John Ambulance has been mistaken as the BRCS (British Red Cross Society) as the organisation flew under the Red Cross during the war years both at home and abroad. The BRCS was relatively small in Ireland and mainly a non-uniformed organisation at the time.

During the Rising, members turned out across the city, with many reporting to the SJA headquarters. There was a paramilitary structure – Lumsden was in command with Dr Ella Webb in command of the entire organisation. She was a friend of Dr Kathleen Lynn and Dr Dorothy Stopford Price. Webb worked closely with the city hospitals and on Wednesday of Easter Week she summoned for more doctors and nurses in St John Ambulance to attend at 40 Merrion Square.

She understood the hospitals were under strenuous pressure and decided that St John Ambulance needed to set up auxiliary hospitals. A total of seven auxiliary hospitals were set up across the city. Men, women and children were operated on and those hospitals too filled quickly with the wounded. Sir Patrick Dun’s Hospital and the Adelaide Hospital were the first to ask St John Ambulance for help. In these cases, they actually took wounded out of the city hospitals and transferred them to the hospitals that were set up by Webb.

Each hospital had a medical team and stretcher bearers to bring in the wounded. Children as young as 12 were treated at these hospitals – some had been shot and others had to have limbs amputated in an improvised operating theatre.

One member – Corps Supt Holden Stodart, from Dublin – was killed. Up to 10 others were wounded while picking up the injured off the streets. Holden was in charge of St John Ambulance in Dublin and also in charge of the St James’s Gate Ambulance division, where he was also an employee.

Six months after the Easter Rising more than 100 members were awarded with Life Saving Medals or Certificates of Honour for gallantry in tending to the wounded during the “Sinn Féin Riots April-May 1916” (all with the inscription 1916).

In order to get one of these awards, you had to have done something remarkable.

A minute book from the time details why members were awarded the medals. For example, Chaytor, Edith Constance who “had charge of a dressing station for nine hours at Northumberland Road, ministered to dying soldiers, [and] helped to carry in wounded from the street under heavy fire. She showed a perfectly splendid example of pluck at the critical period”.

Pádraig Allen has been volunteering with St John Ambulance for 16 years and is archivist and researcher there. He is now working on preserving the collection at Lumsden House, St John Ambulance national headquarters.

He will deliver a lecture as part of the “Surgeons and Insurgents – RCSI and the Easter Rising” lecture series which takes place at 7.30pm on Thursday, April 7th, 2016. To book a place visit rcsi.ie/2016