Sarcoma conference for awareness and strategy 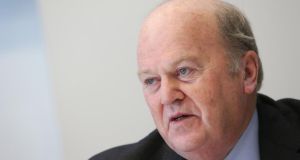 Minister for Finance Michael Noonan is to open Ireland’s first conference on sarcoma this week.

Earlier this year, the Minister was diagnosed with the rare cancer, which affects between 150 and 200 people a year in Ireland.

The conference will be held in Dublin on Thursday and will bring together Irish and international specialists in the field. It is organised by the Irish Sarcoma Group, which was established by Dr Charles Gillham, consultant radiation oncologist at St Luke’s Radiation Oncology Network, in Dublin, with colleagues who have a special interest in this group of diseases.

Sarcoma is a cancer felt as a lump that can affect fat, muscle, blood vessels, cartilage or bone. It has a large number of subtypes and can affect anybody of any age and in any part of the body, though it is more frequently seen in adults aged between 30 and 50.

About half of all sarcomas will develop in the thigh, buttock and groin area, with up to 15 per cent in the upperlimb including the shoulder, arm and hand.

The majority of sarcomas arise in soft tissue and they represent less than 1 per cent of all cancers, with 30-40 people per million being diagnosed with the condition every year.

Radiotherapy and chemotherapy play vital roles in many of the different tumour subtypes, either curatively or in a palliative setting.

Noonan received five weeks’ radiotherapy at St Luke’s Hospital to shrink his sarcoma before it was removed at Cappagh hospital in Dublin in May. Speaking after the procedure, he said his medical team believed the treatment had gone well and was “upbeat about the prognosis”. The Minister also said there was no damage to his shoulder muscle and his risk of recurrence was low.

The meeting is aimed at surgical, medical and radiation oncologists and other health professionals with an interest in sarcoma.

Gillham recommends that an enlarging lump, particularly one that measures more than 5cm and/or is causing pain, should be checked out by a doctor, though the majority of such lumps are not caused by cancer.

Gillham says the primary objective of the conference, being held at Dublin’s Gibson Hotel, is to help raise awareness of sarcoma and develop a centralisation of services.

“It is a strategy meeting as much as a conference,” he says. “I hope it will become an annual event.”

For further details and to register see globalteamwork.ie/sarcoma.

Dispatches from the frontlines: Gaye Cunnane is professor of Rheumatology at St James’s Hospital

Covid-19 crisis: ‘We have had to learn a new disease, new vocabulary, new skills’
7