Rape Crisis Midwest to close due to lack of funding

Centre will shut temporarily due to a shortfall of €120,000 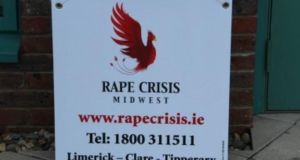 Rape Crisis Midwest says it has no way of making up the shortfall of €120,000.

One of the busiest Rape Crisis centres in the country has had to close because funding has reached a “critical point”.

The Rape Crisis Midwest, which serves Clare, Limerick and Tipperary, will be closed temporarily because of a shortfall of €120,000. It currently deals with about 80 people every week.

The agency is part-funded by the Child and Family Agency and has suffered cutbacks over the past number of years.

Financial shortfall
The financial shortfall will mean the closure of the centres in Ennis and Nenagh for at least a month. Its head office at Rosbrien Road in Limerick will remain open but with only a skeleton staff.

In a statement, a centre spokeswoman said there was “no reasonable prospect of meeting our shortfall, estimated to be in the region of €120,000 in the entire midwest”.

“The current fundraising programme will not satisfy that shortfall.”

She added: “This is a decision that we have not taken lightly and has come on the back of additional significant cost-saving measures over the past number of years.

“It is ironic that during difficult economic times, demand for the service in the centres is even greater and we do not wish to have to close our doors to those who are most vulnerable in society.”

Appeal for funds
The centre has appealed to the public for funds to help it get over the financial shortfall.

Rape Crisis Midwest was established 32 years ago. It provides a confidential one-to-one counselling service to male and female survivors of rape and childhood sexual abuse.

The heat is on: seven hot looks for radiators
Real news has value SUBSCRIBE