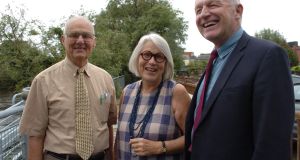 What we know about bacteria and its role in the prevention of chronic diseases has changed dramatically in the past 10 years or so. For instance, scientists have discovered the crucial role healthy gut bacteria plays in both physical and mental health.

In parallel to these discoveries, many chefs and farmers are adamant that the presence or absence of bacteria in our soil is linked to the nutrients in our food which in turn impacts our bodies and minds.

It was this confluence of knowledge about the connections between bacteria in our soil and bacteria in our bodies that was discussed passionately at Our Farms, Our Food, Our Future – a forum on the interdependence between modern farming and food production practices and health at the Taste of West Cork Food Festival in Skibbereen last week.

“In the last 50-60 years, we are part of an enormous experiment in farming and food production. During this time, there has been an increase in the incidence of chronic diseases. It’s time to join the dots between the use of pesticides, the transportation of unripe food across the world and the rise in chronic diseases,” said Majella O’Neill, nutritional therapist who organised the forum.

As a case in point, O’Neill mentioned the plant-based chemical, salvestrol which reacts with our digestive enzymes to reduce toxicity in the body. This chemical, if not destroyed by a fungicide, is at its best in freshly picked ripe fruit and vegetables.

O’Neill says this is an example of a good reason for eating locally produced, freshly picked fruit and vegetables rather than ones picked when unripe and transported across the world.

Darina Allen, chef and manager of the Ballymaloe Cookery School, said that she is deeply concerned about the deterioration of our diet. “I’m shocked that we handed over our food choices to multinational food producers.

“Intensely produced food is nutrient deficient and farmers who are encouraged to produce the maximum amount at the minimum cost are creating a socioeconomic and health disaster.”

Allen says that GPs she has spoken to admit that 60-80 per cent of our health problems are caused by poor diet. “Processed foods are making us sick as is the loss of biodiversity – when you consider 90 per cent of our nutrition comes from less than 30 plants,” she says.

Allen contends that the health of our soil, our plants, our animals and humans are totally connected. She cites Denmark’s plan to become the first organic country in the world as a step forward to more nutrient-dense food.

“Between 80 and 90 per cent of all food served in schools, hospitals and prisons in Denmark is now organic. Why can’t we in Ireland with our long growing season have a similar commitment? Organic food from the family farms of Ireland would be a perfect slogan.”

Prof Ted Dinan, professor of psychiatry and researcher at the APC Microbiome Institute at University College Cork, explained how recent research has discovered how bacteria in the gastrointestinal tract (gut) can affect the brain and behaviour. These discoveries throw new light on the role of diet in conditions ranging from inflammatory bowel disease to diabetes to obesity to depression, Parkinson’s disease and autism spectrum disorders.

“Up to about 10 years ago, it was thought that the presence of gut bacteria didn’t have a major health implication. Now, we know that some types of bacteria in our gut produce essential proteins that we can’t produce ourselves and that we depend on these proteins for the development and functioning of the organs in our bodies.”

He cited how one type of bifidobacteria produces the amino acid, tryptophan, which is key to the production of the mood-regulating hormone, serotonin. “The human brain can’t store tryptophan in great quantities so we need a constant dietary supply to regulate our mood, sleep and eating patterns,” said Prof Dinan.

Acknowledging that there are other factors in the development of chronic diseases, such as lack of exercise, Prof Dinan suggests that throughout our life span, the importance of a rich and diverse range of bacteria in our gut is hugely significant in maintaining good health. He did, however, add that the probiotic food supplements currently available have, as yet, no proven benefit.

Dr Don Huber, professor emeritus of plant pathology at Purdue University, presented research on how the herbicide, glyphosate has been implicated – not only in reducing crucial minerals in soils but also in the development of both animal and human conditions from cancer to infertility.

Speaking mainly about genetically engineered crops in the United States, he said “there are thousands of scientific papers documenting the damage to crops, animals and humans from glyphosate but many of these have been censored”.

Although widely criticised in the US by the pro-GMO lobby, Huber travels the world to spread his message to receptive audiences. “The use of glyphosate on our crops not only prevents the uptake of nutrients such as iron and magnesium in these crops but it also has a toxic impact on the healthy bacteria in the soil. They are eliminating the healthy bacteria that control the pathogenic bacteria in our soils.”

A member of the audience said that he had rarely seen a scientist, a doctor, a chef and complementary health practitioners in such agreement. Speaking from the audience, agriculture consultant Pat O’Byrne said that we know more about the levels of minerals in our grasslands and animals than we do in our own bodies. Helen Collins, the chairperson of A Taste of West Cork, said it was important to have serious and in-depth discussion like this at a food festival.

In conclusion, naturopath Ann Darcy said that it is up to us to get our health back to the best it can be.

“Research in the gut-brain axis and how the absence of healthy bacteria in our gut is leading to inflammatory and autoimmune diseases has brought us all into a new learning phase. We now know that we need minerals in our food to make our digestive enzymes and gut bacteria work well. Wellness doesn’t come in a pill. It comes in real food.”

How to eat healthily

– Avoid foods with a sell by or best before date.

– Don’t shop when you’re hungry and if shopping in a supermarket, choose foods from the periphery, not the central aisles.

– Trust your senses when buying food. Feel it and smell it – taste it if you can.

– Learn how to cook from scratch – ie use fresh vegetables, meat, fish or poultry with spices and herbs rather than ready-made sauces and prepared meals.

– Pay less attention to food claims and more attention to where fresh food is grown. Buy locally grown produce when possible rather than food that has been picked unripe and transported across the globe.

– Eat as wide a variety of fresh food and dried or frozen food when fresh produce isn’t available.