Pet project: how dogs can help children with autism

Autism is no match for our best friend, as research shows that having a dog breaks social barriers 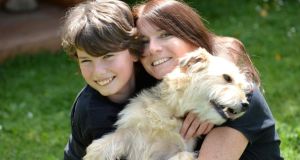 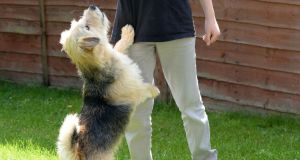 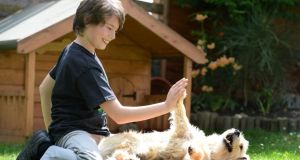 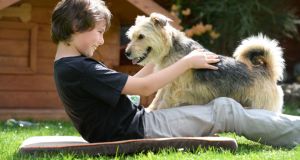 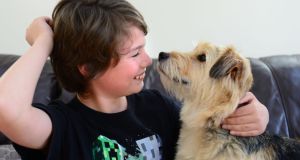 Alacoque Cawley spent a year looking for a friend for her son. Evan had been diagnosed with autism spectrum disorder when he was seven, and although Alacoque had been told he was at the high-functioning end of the spectrum, it was no consolation when she saw how he struggled to interact with other children.

“When he was younger, kids would call here and he would turn his back to them, put his head between his legs, and speak to them upside down,” says Alacoque. “He wouldn’t go out, and when he did go out he was so awkward. He would just stand there, flapping or dancing, or saying something. And the kids would look really confused.”

In time, the children stopped calling for him. “He was very isolated, here in the house.”

Alacoque’s search for a friend for Evan ended when she found Max, a two-year-old wire-haired terrier cross, at Cavan SPCA. Max became Evan’s companion, a substitute for the friends he couldn’t have.

But since Max’s arrival in September last year, Evan has changed. For a start, he’s no longer housebound. He’s always out and about with Max. They go to the park a lot, where Evan freely interacts with the other dog walkers and chats so readily and easily that many are surprised when they hear he has autism.

His behaviour at school has changed. Previously, Alacoque would have been called to the school at least once a week. This year, she’s been to the school on two occasions. And Evan has joined a youth club.

Dogs are helping the children with their anxiety and problem behaviours. And when a dog is present during social encounters, children with autism have been found to use more of the social skills they normally struggle with, such as making eye contact, smiling, and maintaining a conversation.

Deborah Conlon got a miniature Jack Russell called Walter as a companion for her son, four-year-old Robert-James, whose autism left him struggling to get close to other children, never mind make friends.“He does notice other children; he’s not oblivious to them. He will notice other children in the room. It’s as if he wants to get involved: he watches them; he observes them. But he’ll walk over and just stare at them. He can use gestures, and he can use a bit of sign language to communicate. He doesn’t know how to initiate play, or how to get involved. You can see that he doesn’t know what to do.”

Walter has helped Robert-James come out of his shell, says Deborah. “When the dog’s there, people are coming over, and it starts a three-way interaction for him. Before, he was very happy to just do his own little thing.”

Dr Joan Goodman and Dr Laurel Redefer, of the University of Pennsylvania in the US, found that the presence of a dog in children’s sessions with a therapist led to greater verbal and nonverbal behaviours, while a study by François Martin and Jennifer Fornum of Washington State University, in the US, found that children were more likely to be playful and to engage with the therapist when a dog was present.

More recent research, led by Karine Silva of the University of Porto in Portugal, found that having a dog present during therapy sessions curtailed verbal and physical aggressiveness, and led to more smiles and affectionate behaviour.

Similar effects have been seen in typically developing children.

A study of children’s emotional development by the University of Cambridge in the UK revealed that children who had experienced adversity in their lives were more likely to turn to a pet for support than to a sibling or a peer.

And while it could be expected that these children might struggle socially, it was found that they had better developed social skills – such as sharing and helping – than their peers.

Other studies have found that typically developing children with pets have better self-esteem, social confidence and empathy than children without pets.

Exactly how dogs influence behaviour in children with autism is not entirely understood, but there’s a broad consensus that they act as catalysts for social interaction while helping to reduce the anxiety their owners normally experience in social situations.

“I think the important thing to mention is that the dog is a mediator. It’s not the case that the dog is going to teach the child social skills,” says Dr Jennifer Holloway, director of the PhD programme in applied behavioural analysis at NUI Galway.

“If parents are being told that a dog will teach those social skills, that would be wrong. But the dog opens up opportunities to learn social skills. It allows the child to go into an environment that’s unfamiliar with somebody who is familiar.

“It also opens the opportunity for others to approach. Lots of people like dogs, so you’ll find other children will approach kids who have a dog.”

Any dog will do

“A lot of people look at Labradors and golden retrievers, the big dogs. But you don’t need a big dog. I would quite often say to people, especially if they’re not really into dogs, if you haven’t had a dog before, don’t get a big dog.”

However, while any dog may be capable of helping a child develop their social skills, not every child is suited to having a companion dog.

“Some kids might not have the skills to have a dog, or they might have a lot of extreme, challenging behaviours, and that just wouldn’t be a good match,” says Holloway.

And, of course, not everyone loves dogs. “If a child isn’t into dogs” they’re unlikely to bond in a way that would provide any benefits, explains Geraghty.

For Alacoque and Deborah, finding companions for their sons has led to some unexpected benefits. Both boys now inhabit bigger worlds, with the skills and confidence to explore them.