Women on childcare costs: ‘I’m trying to stick it out’ 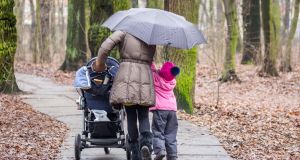 ‘I know so many talented, hard working, smart women for whom high mortgages and long commutes have meant that childcare costs were the straw that broke the camel’s back, and they have decided to stay at home.’ Photograph: iStock/Getty Images

As a new report shows women are being shut out of the workplace by the high cost of childcare in Ireland, The Irish Times asked readers for their family’s experiences. Here is a selection of the responses we received.

Joanne Phipps: ‘I’m trying to stick it out’

I have three children aged six, three and one. Crèches in our area in Dublin cost €1,100 per month full-time for one child. Once the child is in the ECCE year, this reduces to €800 a month. There is no discernible further reduction in cost when they start primary school, as afterschool care ranges from €700 to €900 per month.

Clearly, with three children, these costs are unaffordable, even if both parents are working with good wages. If we were to pay for centre-based care, it would amount to €2,800 per month, or 43 per cent of our combined take home pay. And we earn 60 per cent more than the average full time wage. We employ a childminder at €11 an hour, four days a week. This still amounts to 30 per cent of our take home pay.

I have come close many times to deciding to stay at home. The reduction our combined income would be vastly offset by the elimination of childcare costs, and the stress of trying to combine a full time job, commute, pick-ups etc would be gone in a flash.

I’m trying to stick it out, hoping that costs will reduce as time goes on and knowing that it is very difficult to rejoin the workforce after leaving it for some time. I’m also good at my job, and I enjoy it.

For those of you who think “why should my tax payers money go to subsidizing your childcare costs?”, if I decide to stay at home, the exchequer no longer gets the benefit of the tax that I pay each year - amounting to €21,000 annually. That’s tax that goes towards providing the services that you do use. Subsidising childcare would cost a lot less than that.

I know so many talented, hard working, smart women for whom high mortgages and long commutes have meant that childcare costs were the straw that broke the camel’s back, and they have decided to stay at home. Our economy would be so much better off if those women had been encouraged to stay within the workforce.

As a lone mother with two children who works full-time, I pay massive childcare costs. My daughter (2) goes to crèche costing €450 per month. In the afternoons I pay a childminder to collect her and bring her home to have her nap and spend time in her home, instead of being stuck in a crèche for 10+ hours a day. That costs €50 per day.

My son (9) comes home three days a week after school and does various activities such as swimming, and tennis, which my childminder brings him to, at €10 per activity per session, so that costs €150 a month. Two days he goes to after-school club, for €200 a month.

All in all, my childcare costs about €2,000 a month, excluding overtime. If I need to go to Dublin for meetings, or go abroad for conferences, I have to pay another €100 to get my childminder to sleep overnight.

I also have a mortgage which, with insurance, costs €2,000 a month. As a single parent, I hit the top tax bracket after gross income of €36,000 a year, so half of my childcare, and every other bill that I pay such as ESB, food, heating, clothing, transport etc, everything is at the top rate of tax and I pay 52 per cent tax including PAYE, PRSI and USC.

It is no wonder few single parents work. Childcare costs are not optional for single parent households. Where you have a married couple and both work, you have double the income to pay the bills. Where you have a married couple and one income, the other parent is at home and you save the childcare costs. Single parent families are at a huge financial disadvantage, putting those who work at risk of burnout.

Childcare for single parents should be tax deductible at the marginal rate. Everyone gives out that single parents are scroungers and live off the state, but when you work out what you need to earn gross, and then the tax you need to pay, to have enough after tax income to pay a mortgage, full time childcare and the other essentials, then you realise why so few women work.

It’s like being a hamster on the wheel, running like crazy and going nowhere, just to stay still. The tax system for single parents needs a major overhaul.

Louise Byrne: ‘The Government should be helping parents to stay at home’

I am a mother of four. I’ve worked part time the last few years and am now taking a career break. I fully intend to return to work when the time is right, but I really feel the Government should be helping parents to stay at home with their children when they are small. Subsidised childcare is helpful but should be done in tandem with supporting parents to stay at home for the short time that their children need them so much.

Jenny Smith: ‘I am the main income earner and my husband stays home’

We have the opposite situation in our house. I am the main income earner and my husband stays home and minds our 16-month-old twin boys with our mums’ help, while I go to work. It doesn’t make financial sense for him to work full time at the moment as almost all of his earnings would go on childcare and work related costs. He’s losing out on pension payments and PRSI.

We struggle financially but we are stuck in a trap where we can’t afford childcare as his income is low, and he can’t go to work and try to upskill and improve his earning potential. We don’t qualify for any benefits other than the children’s allowance. We do value having our boys at home with family while they are small, but we have no savings and live month to month.

Yvonne O’Connor: ‘I may need to quit my job’

I went back to work when my daughter was one. She went to a well known crèche in Dublin. I was miserable, so was she. The manager would change every month, and when I collected her, no-one knew her name, for the bargain price of €1,000 per month.

So we left Dublin and moved home. I was lucky to get a job with only a two-hour round trip commute, my husband still treks up to Dublin every day. I found a nice Montessori to take her before school in the mornings, and my mum to take her three days after school until 6pm. My mum is pushing on in years and I’m constantly exhausted, so I may need to quit my job. There are no other prospects with any flexibility.

My husband went to school in Spain until 6pm every day. A three-course meal was provided in the school by the state at 2pm, and afternoons were for homework and/or sports/arts. The teachers worked from 9am to 5pm every day. I believe this is the case in most European countries.

Does our Government not care about supporting working women, particularly in the private sector in this country?

Ann O’Neemus: ‘Why are big organisations not stepping up and providing childcare?’

I wanted qualified staff in an insured premises minding my child, so chose crèche. There are none where I live, and the work crèche was oversubscribed with year-long waiting list. I looked into leaving work, but couldn’t afford to pay the mortgage. By a stroke of luck, I got a spot in a crèche far away from where we live due to a cancellation after looking for eight months. Why is there not a census of where kids are to determine childcare facility needs? Why are big organisations not stepping up and providing childcare on site for their staff?

Elaine Lavin: ‘We find it hard to manage’

I’m currently preparing to go back to work after my second maternity leave. I have two children aged two years, and five months. Our childcare costs are €300 a week. We have had to go to two different facilities as I feel a crèche suits my two-year-old but a childminder is better suited for our baby. Costs are extortionate, and we find it hard to manage.

‘I’ve had my butt kicked for the past three years’: Jamie Oliver on fame and failure
9