Why do we constantly share photos of our food?

Anxiety and vulnerability may be behind online sharing, not simple narcissism 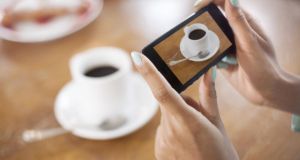 Why does someone take a picture of their lasagne and share it online with 600 people?

It’s a core question in an area of ongoing interest for Colman Noctor, a child and adolescent psychotherapist with St Patrick’s Mental Health Service.

I share, therefore I am is the title of the presentation he will give at ReachOut’s forthcoming conference on technology and wellbeing, in which he will explore the psychodynamic of online sharing.

“What attracts people to do it – and others not – and how is social media creating cultural norms around what’s public and what’s private?” Noctor asks.

He challenges the common view that people who post a lot about their lives are a bit full of themselves and inclined to narcissism. Instead, he has seen that anxiety and vulnerability are often the motivation.

People project a “hoped-for self” online rather than their real selves, he says.

“We conceal elements of ourselves and embellish other elements in order to cultivate a hoped-for self online.”

Far from seemingly trivial items being posted without a thought, he found that people ruminated a lot over their disclosures or their shares because they were thinking about how it would be perceived.

If you don’t need to cultivate an online identity, you are probably happy with your real identity, Noctor says. It reminds him of the magic Mirror of Erised (“desire” spelled backwards) in the Harry Potter stories, which reflects back to people what they really want.

It is at the stage where people now believe that “something isn’t real until you share it”, he says. “It used to be, ‘I have a feeling, so I share it’; now it’s, ‘I need a feeling, so I share’. The sharing is manufacturing a response, which is fundamentally different to how we relate.”

People use Facebook to process emotions, to see what people come back with and whether they validate their feelings.

Even those who just “lurk” on social media and rarely contribute are affected by the whole sharing process. They can’t help wondering if what their friends and acquaintances are posting is real or not.

“If the assumption is that it is real, your life is going to look pretty miserable in comparison,” Noctor says.

However, “what I would see more is a kind of a constant hum of anxiety around the experience of being online”, he says. It might be that status updates don’t reach the number of likes they had hoped for, or they will be checking their social media through the night and are consumed with the need to be putting stuff up.

“People will say that it is not important to them how many likes they get for pictures but it is, it’s fundamentally important,” Noctor says. “I worry that if we over-rely on external validators, are we able to have our own sense of who we are?”