Was the US diner lady right to scream at a toddler?

Darla Neugebauer, the owner of Marcy's Diner in Portland, Maine let her frustration out on a screaming child and seemed proud to defend it on TV. Social media went wild over whether she was right or wrong 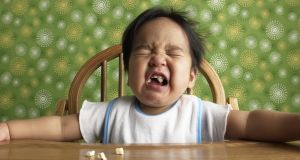 There are unwritten rules around children in restaurants. You expect parents will have enough self-awareness and manners to move the child outside if the child is disturbing others. Photograph: Getty Images

The mother of a two-year-old who was screamed at and told to shut up by the owner of a diner in the US has called the woman a “deranged lunatic”.

Darla Neugebauer, owner and chief cook at Marcy’s Diner, shouted “This has got to stop!” at the toddler, who she says had been screaming for 40 minutes. “And guess what? She stopped.”

The incident has given rise to a minor storm on social media in the US and internationally. Some commenters on Twitter and Facebook praised Neugebauer because they’d had so many eating experiences spoilt; others vehemently supported Carson.

Both women have defended their own actions.

The child’s mother, Tara Carson, who was on holiday from New York with her husband, told a local TV news station that Neugebauer “was reaching over the counter pointing at my daughter and screaming in her face. I was in shock . . . the look of fear in my daughter’s face . . . I felt helpless as a mom.”

Carson, in response to attacks on her own parenting skills, said: “I’m doing my best to raise a good person.”

Let’s calm this down for a minute. If you’re a parent, you’ve been there. You’re travelling and have no choice but to eat in a restaurant, no matter how cranky your toddler is. Maybe you’re not travelling, but would just like to eat out as a family, however questionable bringing a toddler to a restaurant unless absolutely necessary may be.

“The owner should not have shouted,” says Sarah Doherty, child psychologist. “She should have talked to the parents. There are unwritten rules around children in restaurants. You expect parents will have enough self-awareness and manners to move the child outside if the child is disturbing others.”

Neugebauer has since admitted that she may have made a bad decision. Doherty agrees she exercised poor judgement. “It’s easier to shout at a child than at the parents,” says Doherty.

Not every restaurant has a Neugebauer, although those nasty glances from other diners and the forced smile on a manager’s face may be telling you with silence what they would really like to shout. And let’s face it, there are parents who staunchly ignore the havoc their children are creating, believing that paying for a meal means that staff are therefore running a badly organised crèche.

“You have to plan a restaurant meal like a military operation,” says Doherty. “And you have to look at other people’s faces to see if they are being disturbed.”

Before you get to the restaurant (if you dare), the parents (if there are two) need to agree that one parent will leave the restaurant with the child if there’s a fuss, she advises.

To prevent a tantrum, “Keep interacting with the child. Bring some toys or colouring books and crayons for the child to play with. And judge the temperature in the room.”

Restaurants can be noisy, confusing places for small children, she adds.

Reactions from around the world were choicely worded: “Cheers to Darla Neugebauer at Marcy’s Diner in Portland, ME. I’d have throw them all out long before you erupted.”