Sex education – too much information or or not enough? 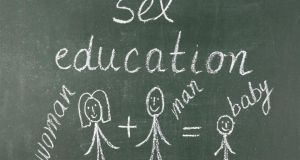 OMG – TMI? Or not enough? Most of us may know that means “Oh my god, too much information.” What about MOS? “Mum over shoulder” is a warning that texts need to be censored from any incriminating information that would get the sender into trouble.

But are parents the ones in trouble as we struggle to keep up with the fast-changing world our children and young teenagers are growing up in?

My 10-year-old daughter’s class have just had “puberty week” in which they were told about the mechanics of maturing. She told me there was lots of sniggering, a few confused questions and some interesting revelations. “I have three holes?” someone inquired in wonder.

A letter came home the week before informing parents of the talks, and advising us to run through the basics first ourselves. I was fine with this having already bought The Books and we have had The Talks. But from what my daughter told me, it was clear that this was all new to several of the class. With children maturing earlier than ever before, this is surprising.

The average age of the onset of menstrual periods in girls was 15 in 1900. By the 1990s, this average had dropped to 12½ years of age. It would not be unique for someone in my daughter’s fourth class to already have started their periods.

Almost certainly most of them will already be in the two-year puberty phase of hormone and body changes that leads to the first menstruation.

Yet Carmel Hume, principal of Presentation Primary in Terenure, Dublin, is concerned how many children don’t know the basics yet.

“It surprises me that that is still a shock to girls. Puberty is coming earlier and they don’t know what’s happening. For some, being taught about periods is new to them. And it’s obvious from the sniggering that they are not used to language such as penis and vagina.

School is responsible for explaining the facts, so now children my daughter’s age know the biology. But what happens next? Who and what shapes their knowledge between now and the next session in sixth class and then secondary school?

“I firmly believe the parents are the primary educators,” says Hume. “I’m shocked that two generations later from my own childhood, some children are still sniggering about real words like vagina and breast. They’re just not hearing that language being used at home.”

Hume believes that while schools can teach the facts and make a real effort to keep up with the changing context of those facts, it varies greatly how much that knowledge and understanding is supported and complemented at home.

Quiz: Do you know what your kids are typing?

At the moment, our children are taught in bite-size levels, at incremental stages throughout their formal education years. The curriculum puts “life issues” under the umbrella of Relationship and Sexuality Education (RSE) which is part of the larger Social, Personal and Health Education (SPHE) at primary, junior and senior cycle level.

Taught within a moral, spiritual and social framework, it promotes a positive attitude to sexuality and respectful attitudes and behaviour towards oneself and others.

Junior cycle topics include titles such as “Me as unique and different” and “Respecting myself and others”. But often this is not being reinforced and continued at home.

According to Hume, proper terminology is used in school starting at Junior Infants level. “But it’s a snapshot of terminology referenced in a 30-minute lesson and then, for some children, those words aren’t used again until next lesson in Senior Infants.

“As teachers, we have a programme to follow but the home and outside influence is way stronger, and people underestimate the importance of making these topics part of everyday life.”

Eleanor*, who has just turned 17, has gone through most of the school sex education. She was taught the basics in RSE and has recently completed modules in contraception and gender studies.

“A nurse came to our school and she was really down to earth. Kids appreciate not being spoken to like we’re five and she said it how it is. But the focus was very much on the facts and nothing on the emotional side of it all.

“I would have found that useful, but the emotional aspect of relationships is not talked about in schools.”

Real information for very real situations that our young girls and boys will face, but for many, they are getting little or no guidance.

According to Eleanor, she got that support at home. “Parental support is a big thing. My mum talked about the emotional side of stuff, and I feel very well equipped to deal with what’s happening around me.” But, according to

Hume, many parents are just not preparing their children, or monitoring what they are accessing online.

“I have a big worry about social media and a lot of the information children are learning is warped because they are being exposed to material that is inappropriate and, for many children, frightening and difficult to comprehend.

“I really believe that parents are very naive about the material children can access on their phones and devices,” she says.

Adeline Meagher at the Department of Education and Skills (DES) says schools are increasingly aware that it is necessary to teach beyond the content of the RSE/SPHE programmes.

“The DES has played a central role in supporting the development of resources. For example, we recently liaised with Glen [Gay and Lesbian Equality Network] and the Irish National Teachers Organisation [INTO] on providing resources for schools to address LGBT-related issues.”

But schools can only do so much, she says. “I do think we as teachers are trying to keep up with what’s going on out there,” says Hume.

“We can talk in age-appropriate ways about internet safety, but it really needs to be reinforced at home. The school curriculum is very focused on promoting self-esteem and confidence, and encouraging the ability to make decisions for themselves. But there is very little we can do about a home situation that is not supporting that.”

Back at school, Eleanor feels her school sex education was good. “But honestly, it was a combination of what I learned at school with what my mum talked to me about that has made me feel confident about who I am and how I deal with things.” * Eleanor’s name has been changed