How surrogacy works – or doesn’t – in Ireland 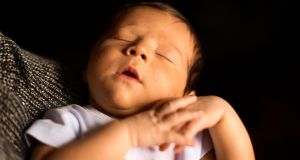 ‘As soon as the child is born, you will have to have your solicitor on standby to make sure all of the relevant papers are ready to be signed,’ says solicitor Tracy Horan, who specialises in surrogacy law.

In the absence of Irish laws on surrogacy, having a baby this way is fraught with legal, financial, moral and emotional challenges. But, with international adoption almost at a standstill, it is an option that more couples are considering.

Now, the international, not-for-profit organisation Families Through Surrogacy (FTS) is bringing one of its conferences to Ireland for the first time next month.

“It’s for couples considering this challenging but very achievable way of having a family,” says a member of the Irish organising committee, John Duffy. He and his wife became parents of a baby boy in 2014 through surrogacy in India.

Duffy, who spoke at the FTS conference in London last year, will speak along with some of Ireland’s leading family law professionals, clinicians from various countries where surrogacy is legal, and fertility counsellors.

The National Infertility Support and Information Group (NISIG) set up a surrogacy support group 2½ years ago, of which Duffy is facilitator.

Interested couples are advised to have an initial legal consultation with an experienced family law solicitor in order to understand their specific circumstances from an Irish family law point of view, he says. It is also suggested that they read the Government surrogacy guidelines for Irish citizens.

Most countries that have legislated for surrogacy restrict it to married, heterosexual couples. Currently, the US seems to be the only option for gay couples, but they can avail of altruistic surrogacy in the UK and also in Mexico’s Tabasco state.

Although there is no law prohibiting surrogacy in Ireland, it is understood that most, if not all, IVF clinics here may offer advice but will not facilitate IVF services for this process. So if, for example, a sister offers to carry a couple’s baby, she and the intending parents will have to travel elsewhere to enable her to get pregnant with their embryo.

Legal issues over establishing parentage, after the sister gives birth to the baby here, are similar to when a couple bring in a baby born to a surrogate abroad. However, when using a surrogate abroad, there are added complexities surrounding the exit from that country and the baby’s citizenship.

Under Irish law, the woman who gives birth is the mother of the child, explains fertility lawyer Fiona Duffy, who will be speaking at the conference. If she is single, then she alone is the parent and guardian of the child.

However, while the commissioning father can have his parentage declared, the biological/commissioning mother cannot. This was tested by an Irish couple who had twins after embryos created from her eggs and his sperm were implanted in her sister, acting as surrogate mother.

In that case the genetic parents applied to the High Court for both of them to be recognised as parents after the Superintendent Registrar for Dublin refused to alter the twins’ birth certificates listing the surrogate as the mother and her brother-in-law as the father.

Although the DNA evidence of the genetic parents was accepted, the superintendent’s legal advice was to rely on the maxim of mater semper certa est, the mother is always certain – ie the woman who gave birth – in refusing to alter the births register.

The High Court found in favour of the couple in 2013, but the State appealed this ruling to the Supreme Court and won. The Chief Justice Mrs Justice Susan Denham said the issues in the case arose from radical developments in assisted human reproduction and were “quintessentially” for the legislature, not the courts, to address.

“The promise of [surrogacy] legislation has been discussed for 10 years without actually happening,” says John Duffy. It was left out of the Family and Relationships Act 2015 but Minister for Health Leo Varadkar has said that provision for altruistic, not commercial, surrogacy would be made in the legislation on assisted human reproduction currently being drafted.

Meanwhile, as of January 18th this year, a female intended parent can establish a legal link to the child that has not been available up until now, says John Duffy. He is referring to part four of the Family and Relationships Act 2015.

Solicitor Tracy Horan, who specialises in surrogacy law, says there is now provision for “a person, other than a parent, to apply for guardianship, if certain conditions are satisfied”.

This means that the commissioning mother who has used a surrogate will be able to apply for guardianship when those time periods have served out, explains Horan.

“Consent is needed from all guardians, though the court can dispense with this, if it is in the child’s best interest,” she adds.

However, these issues are down the line for a couple using a surrogate abroad, because their first concern is to get the baby home. How this is done depends on where the surrogate lives and the citizenship of the biological father.

Exiting is easiest from the US, where there is well-established surrogacy legislation in a number of states.

“A pre-birth order is made,” says Fiona Duffy. “Once the baby is born, the commissioning couple are registered as father and mother of the child born on the birth certificate. A child born in the US is an American citizen and, therefore, entitled to an American passport, on which he/she can travel to Ireland. It would be normal to expect that such a child will be home within a week or two.”

Back in Ireland, some couples may leave it at that – raising a US citizen and presenting themselves as parents, although under Irish law they are not parents of the child and could, as such, be committing an offence.

Therefore, to be absolutely correct, the commissioning father should make the same application as a couple coming from other countries, she explains.

Although exiting the US with a baby is fairly straight forward, the overall costs involved in the surrogacy process are prohibitive, running at well over €100,000, which is why couples look to countries such as the Ukraine where it could cost less than half that. But while the birth certificate issued there will also list the commissioning couple as parents, the child is not regarded as a Ukrainian citizen, so is temporarily “stateless”.

However, a child born to an Irish citizen anywhere in the world is entitled to Irish citizenship – provided that parent provides proof of parentage. And in the case of surrogacy, only the father can do that, to obtain an emergency travel certificate to get the baby home to Ireland.

“As soon as the child is born,” says Horan, “you will have to have your solicitor on standby to make sure all of the relevant papers are ready to be signed”.

“An interpreter is needed to translate for the surrogate mother and a foreign legal adviser to make sure she understands what she is signing.”

To get an emergency travel certificate, the commissioning father will have to prove he is the father. An Irish embassy official attends DNA testing in order to do this. He also needs to have the surrogate mother’s consent – and, if she is married, her husband’s.

The commissioning father, Horan adds, also has to provide undertakings to the Irish authorities that he will inform the HSE two days after he gets back to Ireland that he has brought the child into the State, and apply for a declaration of parentage and guardianship within 10 days.