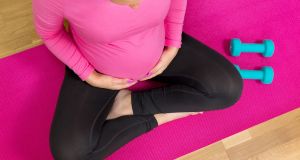 Pregnancy is a normal physiological process and it is okay to be active throughout. Photograph: Thinkstock

If getting up from the sofa to go for a walk around the block involves a battle of willpower at the best of times, pregnancy may seem the perfect excuse to stay where you are.

After all it is advisable to rest when you are expecting a baby, right? Well, yes, to a certain extent, but it is also important to keep physically active. Yet a new study has found that women tend to regard the two as mutually exclusive.

The results of a joint Irish-UK survey suggest that pregnant women are focusing on being sedentary at the expense of exercise, despite the health benefits of maintaining daily, moderate-intensity physical activity throughout the nine months of a low-risk pregnancy.

The recommended half-hour of daily activity is linked to benefits such as less weight gain and reduced risk of gestational diabetes; decreased symptoms of depression and anxiety; less extreme birth weights and also shorter labours. Whereas sedentary behaviour has been associated with impaired glucose regulation, excessive weight gain and increased incidence of infants with macrosomia (high birth weight).

Intention Toward Physical Activity and Resting Behaviour in Pregnant Women

Analysis of questionnaires filled in by almost 350 pregnant women in both Cork and Newcastle-on Tyne also finds that they feel less able or confident to be active in the later stages. “Women feel more social pressure, or permission, from their families, friends and/or healthcare professionals to rest in the later stages of pregnancy,” it states.

One of the authors of the report, Patricia Leahy-Warren of University College Cork’s school of nursing and midwifery, knows women “who think it is their divine right not to do anything when they’re pregnant”. They feel they don’t have to take the stairs or walk to the shops.

“It is a mind set,” she says – one that is encouraged by those around them who are quick with the reassurance that “it’s okay because you’re pregnant”. But, she stresses, “it’s not okay”. However she distinguishes between exercise and physical activity, such as housework, gardening and generally moving around.

“We are not asking them to do exercise per se but to be more physically active and less sedentary,” she explains. So no, you don’t have to go for a power walk around the park, but you do need to get off that sofa.

It’s a question of balance, she says. “Obviously take your rest when you are feeling tired,” she says, but at the moment people’s thinking is skewed towards avoiding activity.

“Obesity is becoming a big issue in the maternity services and while we appreciate a lot of that is to do with diet and so on we would really like women to be more active,” says Leahy-Warren.

Nicola Coogan (40), who is expecting her first baby on May 25th, couldn’t face exercise early on when she suffered badly with “morning” (all-day) sickness. But now she is back at her local fitness centre doing classes, including a weekly spin class, pregnancy Pilates and as much walking as possible.

“I have had comments from people saying, ‘Oh you are great to be going to the gym, I never bothered; sure couldn’t you put your feet up?’ but for me it’s all about my wellbeing,” she says.

On finding out she was pregnant, Coogan checked with her doctor about exercising. Up to then she had been going to Longford Fitness four times a week, doing hour- long classes of circuit training, spinning, strength and conditioning and another spin class to end the week off.

Her doctor encouraged her to continue and do as much as she felt able for. “She said I would feel the benefit of it as my pregnancy continued and it should help with labour as my body would be looser and I should hopefully have more stamina.”

She also spoke to her instructor, who she knew had given classes throughout her own pregnancy, and was reassured that the exercises could be tailored to suit her.

“My partner was a little anxious that I was doing the spinning class but as I had always done these classes both my doctor and instructor assured me it was okay to continue.”

She finds that the days she exercises, she is in much better form and has more energy. “Plus it is a great way to clear your head after a busy day at work. I also sleep a lot better.

“It’s very easy to go home and sit on the couch, especially when the evenings are so dark but I find this makes me more tired.

“I won’t be putting huge pressure on myself after the baby is born,” she adds. “But I hope that the fact I was exercising beforehand, and enjoying it, will encourage me to keep moving after I have given birth.”

Liz Barrett from Cork, who is 24 weeks pregnant with her third child and normally very active, has found designated pre-natal fitness classes “boring and unchallenging”. In her experience “they were more for geriatric level – they were just so over cautious. I wanted to maintain my fitness because I would look at the labour as a marathon.”

So she has been doing her own thing, with no intention of “sitting on my behind for nine months – a lot of people find that appealing but I don’t”.

However, Barrett thought she could do it all and the instructor didn’t suggest any adaptations or advise her to slow down and, as a result, she was exhausted afterwards.

“That is the other side of it,” admits Barrett. “I learned very quickly and was wiped out for a couple of days. When I went back the next week, I reduced the weights and told her I wasn’t doing certain things and it was fine.”

She also signed up for swimming classes to improve her technique.

Despite the attitudes around her, Barrett doesn’t consider her pregnancy a “medical condition”. An acupuncturist advised her to give up her regular exercise and just go for gentle walks. “At all levels,” she adds, “they tell you to do nothing and it is very disappointing.”

“Intention Toward Physical Activity and Resting Behaviour in Pregnant Women” is published in the March 2016 edition of the journal Birth – Issues in Prenatal Care and can be read at onlinelibrary.wiley.com