Why our social media habits are a pain in the neck 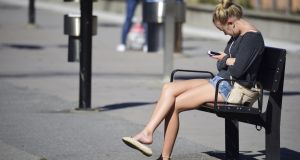 Here’s a game to play the next time you are stuck in a queue.

Try to spot somebody not looking down at their phone. Then ignore that person and examine the others. You don’t need to be a doctor to recognise that most of them will be holding their necks at a strange angle that makes them look almost like giraffes as they push their heads forward.

This awkward positioning would not be a problem were it not that our heads are rather heavy, weighing 4.5kg (10lbs) on average, and our necks are not particularly muscly.

A recent report in The Spine Journal, the official publication of the North American Spine Society, says surgeons there are seeing an increase in patients with neck and upper back pain which is likely to be related to poor posture when using mobile phones. It even has a name: tech neck. The neck naturally curves backwards, but surgeons are seeing that curve reversed, giving patients disc or alignment problems. The authors of the report are concerned that today’s children may need surgery by the time they reach their late 20s if they do not curb their social media use.

Lorraine O’Reilly, a physiotherapist with Physiofusion in Ranelagh, Dublin, agrees with the report’s suggestion that the simplest solution is to put down the device regularly. “It makes logical sense to take regular breaks, to hold the phone up at eye height rather than bending at our necks which would increase the loads through discs and neck structures,” she says, adding the use of voice-activated technology, such as Apple’s Siri, can reduce some of the touch interactions on handheld devices.

“From a practical physiotherapy perspective, regular simple large upper limb movements such as shoulder shrugging, neck side bend stretches, upper back twists and arm circles may all help to deload the tissues and desensitise the pain system,” she says.

Most people carry the head too far forward, according to Frank Kennedy, an Alexander technique practitioner in Mount Merrion, Co Dublin. “This knocks the body out of kilter and has a big impact on posture. It imposes wear and tear on the joints and can make you look an inch or two shorter than your natural height,” he says.

The Alexander technique involves learning to move naturally so as to put less strain on the body. “We need to expand our awareness of how we move,” he says. “Look at the screen with your eyes, rather than locking onto it. Concentrate with your mind, rather than jutting your head forward.”

Our tendency to be reactive does not help, he adds. “We jump up at everything from a text message to a door bell. Overreaction triggers tension pathways in the body. If we can create a gap between stimulus and response, then we can learn to stop tension. You don’t have to wait for the weekend or for a holiday to relax. We look for relaxation in each action.”

When under pressure, we tend to hold our breath. “Holding the breath sends the wrong signal to the brain,” says Kennedy. “We can learn to relax, breathe and send a message to feel at ease.”

Part of the difficulty in helping people to change is that harmful posture over time feels normal. When Kennedy gets a client with particularly turtle-like stance, he will gently guide the head back into a natural position and then show the client in the mirror.

“People say it feels formal or weird as they are not accustomed to it, but the mirror shows it looks natural. That’s why you need someone else to guide you.”

Acupuncturist Cyrille Bonnard regularly sees clients suffering from tightness and stiffness in the neck and upper back typically caused by bad posture. “When it is more chronic, a patient can have severe pain in the neck, shoulders and arms,” he says.

In the long term, it can contribute to a bulging disc

“When bad posture is repeated again and again, and the head’s weight is not distributed equally on the cervical spine, then the musculature becomes unbalanced making the neck fragile and unstable. In the long term, it can contribute to a bulging disc, due to degeneration of the cervical spine, or cervical radiculopathy, which is a condition where a nerve leaving the neck is compressed or pinched.”

Acupuncture can provide pain relief and – combined with tui na (Chinese massage) and specific exercises to stretch the spine and release the pressure on vertebral discs – are a good way to prevent or address problems, he says.

People whose problems return are those who do not address the root of the problem, which is a bad posture

One exercise he uses with patients involves imagining you are being pulled up from the top of the head. “We have to make ourselves slightly taller leading up with the head and by feeling the stretch on the spine,” says Bonnard. “It’s important to keep the head straight (chin in) and not to move the head backward so that can we feel the stretch in the neck. When stretching is attained, we just need to relax our pelvis ‘sitting’ on it.”

That helps clients to release pressure on the spine and readjust to a relaxed posture without slumping. “In general, people whose problems return are those who do not address the root of the problem, which is a bad posture,” says Bonnard.

ESB adds pricing to its slower chargers for electric cars
6