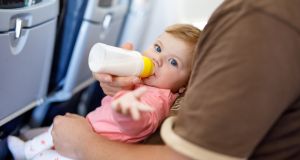 One of the most underrated sketches in the Fast Show was called The Hurried Poor. In it, a frazzled dad is shown laden with luggage, running ahead of his family. They mill through airports, shopping centres and carparks, the dad occasionally turning to shout, “Come on!” or “Hurry up!” They look exhausted and exasperated, always in a rush, always late for something. It is entirely without context which somehow adds to the authenticity of their struggle.

It is exactly what I imagined our first family holiday to be like.

I was mildly stressed about the basic logistics of travelling with a baby (why, for example, is it so difficult to get a taxi with a baby seat?), but to be honest, I was more worried about the potential social anxiety of my baby crying on the plane. It was very probable we would be responsible for making this a particularly long flight for those in our immediate vicinity. I need not have worried; the plane was full of Italians. They were delighted to be sitting beside a baby. They cooed and cawed, asked to hold him and kept him entertained the whole flight.

A miraculous turn of events.

We assumed the journey over was a welcome fluke, but as soon as we left our apartment in Siena for an afternoon stroll, a woman called out from across the street and limped over. Being in a strange city I was on my guard - ready for the scam, but there was no need. She just doted on the baby in broken English and moved on. Not 10 minutes later, as I waited with the pram outside a pharmacy, an ancient and hunched nun blessed him and kissed his feet. This isn’t an exaggeration, or, we realised, a coincidence. Museum attendants, waitresses, strangers in the street - people seemed genuinely happy to see someone else’s baby. It was incredible - we felt like minor celebrities. Assuming minor celebrities feel like valuable and appreciated members of society.

Not long after we returned home, in an attempt to keep the holiday buzz alive, we went for a fancy family brunch in a city centre restaurant. Having booked a seat by the window, we were instead ushered to the back of the room to a table about four inches from the toilet door. After a bit of back and forth, we were eventually moved to our original window seat, but not before being made to feel like a piece of dog vomit on the sole of the waiter’s shoe.

What the hell was going on here?

Then it hit me. Not the answer, but the real question. Like the detective at the end of The Usual Suspects staring at the web of clues when the penny finally drops: do Irish people hate babies?

We have become locked-in to a mind-set where other people’s babies are to be avoided whenever possible. It is symptomatic of an increasingly self-obsessed age, but perhaps it’s not entirely our fault. We have for generations lived in a country where this kind of behaviour was not only encouraged, but essentially State-sanctioned.

As young archaeology student, my first field-trip was to help with the excavation of a cillín not far from Dublin. It was a sombre and eye-opening experience. A cillín is a burial site usually filled with stillborn or unbaptised babies. The logic goes that if an unbaptised infant dies, they cannot go to heaven, so they cannot be buried in consecrated graveyards. There is often a difficulty of connecting our own experiences with those of the past. They seem too distant, somehow unreal. But the people who made these decisions were real, and they destroyed families. This is a practice that continued until the 1960s.

Here is a country that officially sent babies to hell (some argue limbo), for the sin of dying too young. It is a country that systematically tore babies from their mothers, before locking them away. Forced and illegal adoption, systematic sexual abuse of children, draconian abortion laws; it is hard to think of another country that has cared so little for the welfare of its most vulnerable.

This is a country that through monumental incompetence and avarice can’t build a children’s hospital in a timely fashion. Not a bridge, or a casino, or a controversial hotel. A hospital for children.

It might not be fair to compare Irish attitudes towards babies with those of a very select few Italians, but at the very least they have shown there is another way to live. Irritation and impatience with other people’s babies is not a universal condition. It is embedded in our culture; in other cultures it is not. For every eye-roll and complaint when sitting next to a baby on the bus; for every parent and baby made to feel unwelcome in a restaurant, there is a person in another country having the exact opposite reaction to the same set of circumstances.

Is it a ludicrous leap of the imagination to draw a line between our shameful past treatment of babies and our current indifference toward them? I would argue it is not. It is certainly not a straight line, but it exists. We are shaped by our past whether we like it or not, but that doesn’t mean we have to be defined by it.

We can put on our headphones and pretend the baby in the seat beside us doesn’t exist, or we can show a little kindness and finally put the past to bed.