Challenges of adoption past, present and future

Records and assessments are on the agenda for the adoption authority’s new chief executive, Patricia Carey 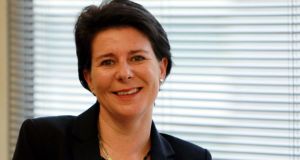 The top job at the Adoption Authority of Ireland has a turnover rate more associated with football managers. But Patricia Carey, its fourth chief executive in less than four years, still thought it was “a really exciting opportunity” when she took up the role at the end of the summer.

She came in after a period of mounting dismay and anger at how intercountry adoptions had all but ground to a halt after Ireland enacted the Hague Convention on the protection of children and co-operation in international adoption on November 1st, 2010. That was the day the Adoption Authority of Ireland (AAI) came into being, replacing the former Adoption Board.

Despite having signed up to the convention in 1993, and allowing 17 years to pass before ratifying it, Ireland seemed hopelessly unprepared.

With the comfort of being able to preface her remarks by saying “I wasn’t here at the time”, Carey, who previously worked as a director of services with the Society of St Vincent de Paul, acknowledges that it was “a challenging transition”.

“I think, like a lot of public bodies, it is difficult to anticipate the changes that a piece of legislation such as Hague is going to bring. Probably it did bring more changes than initially thought.”

For three years, anybody who had a “declaration” prior to November 2010 that approved them to adopt were allowed to deal with countries such as Russia and Ethiopia which had not signed up to Hague, but that transition period ended just over a year ago. This year, to the end of September, just 25 foreign adoptions into this country have been approved by the AAI, although Carey says she would love to see another 20 or so coming through by December 31st.

“We are working with India, China, Bulgaria, Thailand, Vietnam and the Philippines and we are hoping to consolidate an agreement with Haiti,” she explains. The AAI expects news on the latter within weeks, “definitely before Christmas”. There have also been some intercountry adoptions from the US. However, it’s a big change from a decade ago when about 400 intercountry adoptions were approved each year, peaking at 422 in 2008.

“It’s heartbreaking,” Carey agrees, and cites parents who adopted one child from a particular country and may have planned to go back there to adopt another only to find that option closed. She also acknowledges that people who undergo assessment may have already had difficult journeys, such as coming to terms with infertility, before embarking on the long and arduous road of possible adoption.

“But I do think in some instances people have unrealistic expectations,” she says. The global landscape of adoption has changed radically, with some of the so-called “sending” countries better able now to place children for adoption within their own borders, which is a good thing, she stresses.

Intercountry adoptions peaked at 45,000-plus globally in 2004 and had dropped to just over 19,500 by 2012, according to figures compiled by Dr Peter Selman of Newcastle University in the UK. The profile of children available for intercountry adoption is also significantly different, generally being aged three or over and many have special needs.

In the light of the drop in numbers, the AAI is going to have to take a “difficult look”, Carey says, at the right people have to free assessment for suitability to adopt. It’s a very labour-intensive process, yet many who go through it and are approved will, for various reasons, never be matched with a child.

“We are concerned at, I suppose, the waste of resources,” she says, suggesting that “maybe people with complex health needs themselves or people in the older cohort” would be excluded. However, she is quick to say she is not talking about a maximum age gap of 42 years between adult and adopted child that the AAI seemed to recommend in its 2012 annual report when calling on the then minister for children and youth affairs, Frances Fitzgerald, to introduce an upper age limit – a move the minister publicly rejected.

Asked to put a figure on it, Carey suggests “a couple with a combined age of 110”. However, she acknowledges that there is a huge challenge in introducing restrictions.

“When do you draw lines, where do you draw lines and with who? And there are appeals and all of that . . . It is a really difficult one but, given the number of children who will be available for intercountry adoption, we have to work with parents who have the best likelihood of parenting a child into adulthood. We need to be cautious and careful in the use of resources.”

Describing herself as “pragmatic” on funding, Carey believes that the €2.5 million annual budget for the authority – “a very small public-service quango” – needs to be used as wisely as possible. Its allocation of 30 staff is now down to 25, due to the embargo on public service recruitment.

Essentially its role is as a “world-class regulator”, which has statutory obligations to oversee intercountry and domestic adoption. On criticisms of its slow response times, she says they simply don’t have sufficient staff and have to prioritise things such as adoption orders or domestic adoption assessments.

Since both the Philomena film and publicity earlier this year around the former mother and baby home in Tuam, Co Galway, the AAI had a 100 per cent increase in inquiries in some months, Carey reports. She is keen to raise further awareness of tracing before it is too late for many of the parents who gave up babies in the wake of the 1952 Adoption Act and would be in their 70s and 80s now.

“I am very sensitive to the ages of the birth mothers. There is something we can do now to address those needs and I think it would be very positive of the authority to be part of that.”

If the contact preference register had been in place when Philomena Lee and her son, Anthony, had been looking for each other, they would have met, she points out.

The authority believes people have a fundamental right to information about their origins; however, she says, “the balance to that is the right to privacy, or the assurances that people say they may have been given”. It is up to the Government to put a legislative framework around that, she says.

In Alberta, Canada, authorities opened access to identifying information in adoption records in 2004 but only after a period when individuals were allowed to veto the release of their personal details. Out of 90,000 adoptions, some 3,000 vetoes were lodged.

This “could be a very workable solution in Ireland”, Carey suggests. “The AAI would recommend this system as a means of ensuring legislation can be applied retrospectively to adoption records.”

The “other big issue coming down the tracks” is the rights of children adopted here through intercountry adoption to information and tracing.

“We need to start now to have that conversation, to be very proactive,” says Carey. “It is certainly on the AAI’s radar.”

For her first year in the chief executive job, Carey’s priority is to meet and talk to people, hear their views and bring those back to the board and the organisation.

“It’s about relationships,” she says simply: relationships with a wide variety of groups both at home and abroad.

She is travelling next month with AAI chairman Geoffrey Shannon to the Philippines, Thailand and Vietnam “in order to consolidate those relationships and confirm our agreements and to engage more with the central authorities in those countries”.

“I think what some people find difficult to grasp is that we are a quasi-judicial body, so we have to uphold the law; we have to be absolutely rigorous.”

However, she adds: “We need to reach out more and engage with people and hear their views, no matter how difficult they are. Adoption is an emotional subject and when there are emotions people can get a little bit tetchy.”

The open, straight-talking but sympathetic Carey seems well suited to the charm offensive that is probably needed if her time at the head of the adoption authority is going to be more comfortable and last longer than it did for her predecessors.

For more information on the Adoption Authority of Ireland, see aai.gov.ie